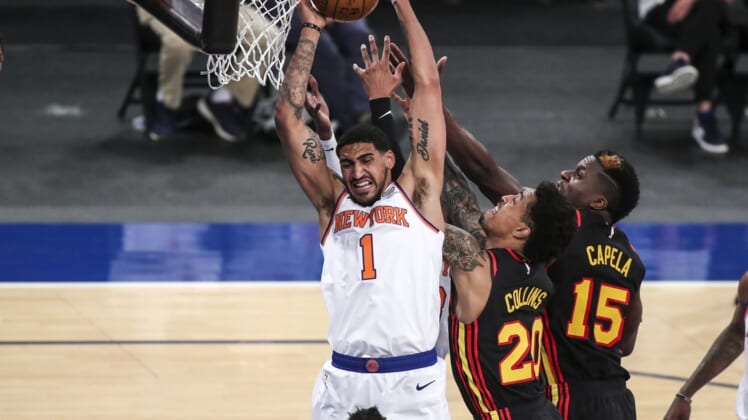 Julius Randle scored 13 of his 40 points in the final 11 minutes — six minutes of regulation and the overtime period — Wednesday night for the host New York Knicks, who remained red-hot by storming back from a 11-point deficit to beat the Atlanta Hawks 137-127.

The Knicks (33-27) scored the first 10 points of overtime to survive a battle of attrition, lock up their eighth straight win — the franchise’s longest winning streak since March 2014 — and move past the Hawks (32-27) into fourth place in the Eastern Conference.

Derrick Rose and Immanuel Quickley each had 20 points off the New York bench. Reggie Bullock (18 points) and RJ Barrett (16 points) each got into double digits for the Knicks, who lost Taj Gibson to a lacerated eyelid early in the second quarter.

Another New York center, Nerlens Noel, sustained a lacerated lip after being hit by Clint Capela in the middle of the third quarter but returned with 9:53 to go in the fourth.

The costliest injury of the night may have been sustained by Hawks star point guard Trae Young, who had 20 points and 14 assists before spraining his left ankle with 1:13 left in the third. He missed a floater and landed on the foot of third-string Knicks center Norvel Pelle.

Young pounded the floor with his fist before being helped off the court by a pair of teammates, and he didn’t return to action.

Capela, who landed hard on his back after stepping on Rose’s foot with 5:31 left in the fourth, had 25 points and 22 rebounds for the Hawks, who lost for the second time in seven games. Bogdan Bogdanovich scored 20 points while John Collins had 18 points and Kevin Huerter added 17 points for Atlanta. Lou Williams scored 11 points off the bench.

The Hawks mounted a 16-0 run to take an 11-point lead in the first quarter before the Knicks held a handful of leads in the second. Atlanta was on top throughout the third quarter and opened up another 11-point edge at 95-84 with 1:47 left in the period.

The Hawks led 109-101 with 7:46 left before Quickley hit back-to-back 3-pointers to start a 15-0 run by the Knicks. However, Atlanta ended regulation on a 13-6 run before Solomon Hill draped Randle and didn’t allow him to get off a shot before the buzzer.

Quickley opened overtime with a layup and Randle and Bullock followed with 3-pointers before Noel’s dunk extended the Knicks’ lead to 132-122. The Hawks got no closer than five thereafter.