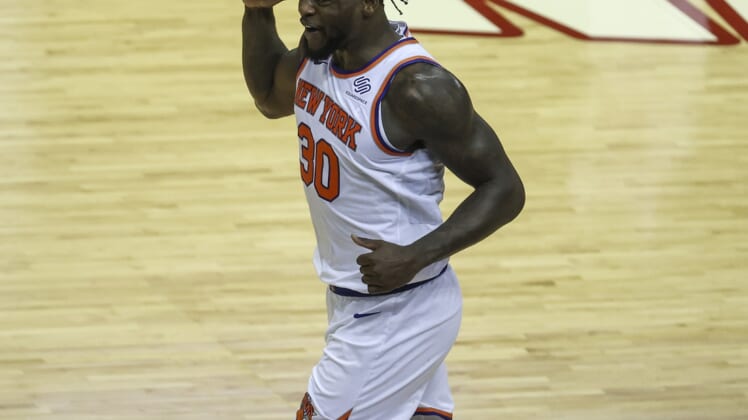 Julius Randle scored a game-high 31 points and authored the clinching run down the stretch of the third quarter as the New York Knicks opened their final road trip with a 122-97 victory over the Houston Rockets on Sunday.

Randle added seven rebounds, six assists and four 3-pointers to his ledger to lead the Knicks (36-28) to their 11th win in 12 games. RJ Barrett chipped in 21 points and seven rebounds while Derrick Rose had 24 points off the bench for the Knicks, who maintained their hold on the fourth seed in the Eastern Conference and home-court advantage in the first round of the playoffs.

After securing a double-digit lead with a 16-1 run midway through the first quarter, the Knicks essentially maintained that cushion until the cold-shooting Rockets (16-49) cut the deficit to 73-64 on a Christian Wood dunk with 5:35 remaining in the third period. Houston took advantage of a sudden stretch of lackadaisical ball security from the Knicks, who committed just one turnover in the first half but had six in the third quarter through the Wood basket in the paint.

Randle responded to the Rockets’ threat with a driving layup and back-to-back 3-pointers that stretched the lead to 81-64. And he was undeterred when Houston called a timeout to stem his tide, following 3-pointers from Reggie Bullock and Rose and two Barrett free throws with another basket plus a three-point play at the 34-second mark to cap his 15-point third period.

While the Rockets were playing the second half of a back-to-back and their third game in four nights, the Knicks were playing for the first time since Wednesday. Fittingly, their energy carried them to that early lead, with Houston missing three field goals and three free throws during the Knicks’ aforementioned 16-1 run. The Knicks shot 6 of 10 from deep to take control in the first quarter.