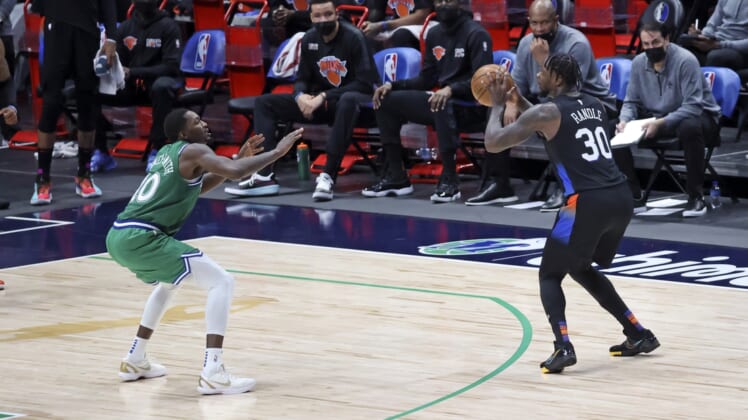 Julius Randle matched his season high of 44 points and also contributed 10 rebounds and seven assists to lead the New York Knicks to a 117-109 victory over the host Dallas Mavericks on Friday night.

Randle fell one point shy of matching his career high while helping New York win its fifth straight game. It is the franchise’s longest winning streak since an eight-game stretch in March 2014.

Tim Hardaway Jr. tallied 16 points, Josh Richardson added 14 and Dorian Finney-Smith had 13 for Dallas, which connected on 44 percent of its shots and was 15 of 45 from behind the arc.

Dallas pulled within 105-99 on Finney-Smith’s dunk with 2:32 left, but Noel made two free throws and Randle hit a jumper to make it a 10-point margin with 1:44 remaining.

The Mavericks moved within 115-109 on Doncic’s 3-pointer with 21.4 seconds left, but Reggie Bullock answered with a layup as New York closed it out.

Randle scored 21 points in the first half, and New York took a 56-52 advantage into the break.

Barrett opened the second quarter with a 3-pointer to give the Knicks a 37-25 lead. Dallas recovered to knot the score at 52 on two free throws by Hardaway with 47.3 seconds left before New York scored the final four points of the half.

The Mavericks held a 67-63 lead after Finney-Smith’s dunk with 6:36 left in the third quarter before New York scored 10 of the next 13 points to take a three-point lead. Dallas inched back ahead by one before the Knicks scored the final five points for the period, including a 3-pointer by Randle, to take an 83-79 edge into the final stanza.