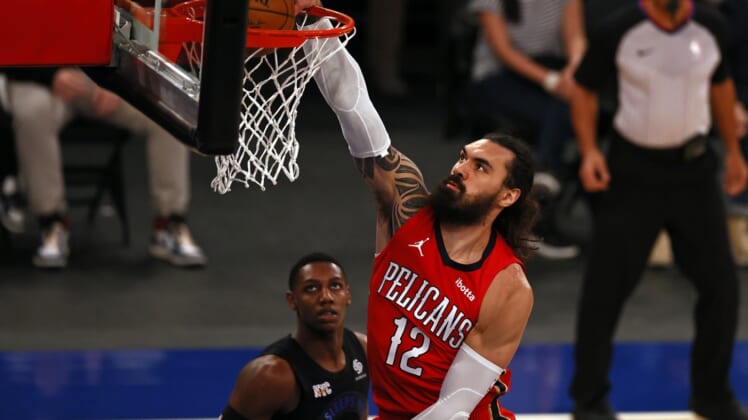 Julius Randle had 33 points and 10 assists as the host New York Knicks won their sixth consecutive game by defeating Zion Williamson and the New Orleans Pelicans 122-112 in overtime Sunday afternoon.

Randle added five steals, Derrick Rose scored a season-high 23 off the bench, RJ Barrett scored 18 before fouling out, Reggie Bullock had 15 before fouling out and Nerlens Noel added 12 points as New York beat New Orleans for the second time in its past three games.

Williamson had 34 points, nine rebounds and five assists, Eric Bledsoe scored 22, Brandon Ingram added 19 and Steven Adams had 10 points and 14 rebounds to lead the Pelicans, who lost in overtime for the second consecutive game. They lost at Washington 117-115 on Friday.

The Knicks scored the first four points of overtime before Williamson made two free throws.

Bullock’s 3-pointer and Randle’s two free throws gave New York a 112-105 lead with 2:11 left and the lead never shrunk to fewer than five points after that.

The score was tied at 92 before Williamson assisted on Bledsoe’s 3-pointer and made two free throws. Lonzo Ball added a layup to complete a 7-0 run and give New Orleans a 99-92 lead with 3:44 left in the fourth quarter.

Bledsoe made two free throws for a three-point lead, but Bullock made a tying 3-pointer with 2.3 seconds left. Bledsoe missed a last-second jumper.

Bledsoe scored 10 points in fewer than three minutes as the Pelicans began the third quarter with a 13-2 run to pull within 59-57.

The rest of the third quarter featured four lead changes and four ties, the last of which came on a dunk by Williamson that evened the score at 79 at the end of the period.

New Orleans scored the first five points of the fourth quarter, but Randle made consecutive field goals to complete a 9-0 run that gave New York an 88-84 lead.

Consecutive field goals by Williamson and Ingram pulled the Pelicans even.