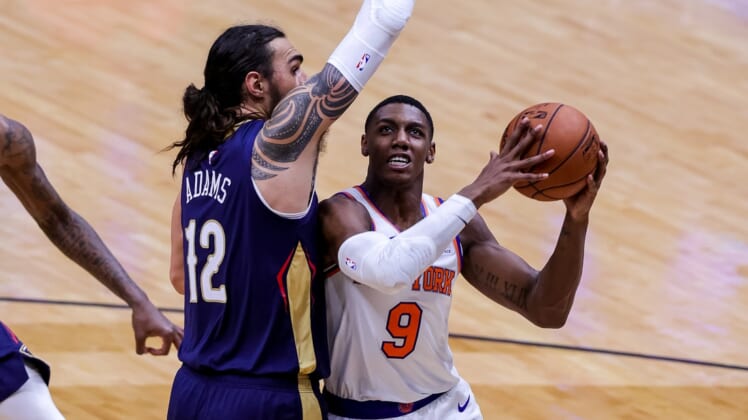 Randle made 5-of-8 of his 3-point attempts and the Knicks made 17-of-33 from long range as they won their fourth consecutive game. The Pelicans made 6-of-28 on 3-pointers as their three-game winning streak ended.

Alec Burks added 21 points, including 14 in the fourth quarter, Reggie Bullock scored 16 and Elfrid Payton and Derrick Rose had 11 each for the Knicks, who will host the Pelicans on Sunday.

New York, the fourth-lowest scoring team in the NBA, used a 40-point third quarter and a fast start to the fourth quarter to take control of what had been a back-and-forth game. The Knicks bench outscored their Pelicans counterparts, 43-23.

The third quarter featured 10 lead changes and seven ties before Ingram made three free throws to give New Orleans an 85-80 lead with 3:12 left.

Rose made consecutive baskets to complete a 9-0 run that gave New York an 89-87 lead. He beat the buzzer with a jumper that gave the Knicks a 93-89 lead at the end of the third quarter.

Burks scored New York’s first six points of the fourth quarter to increase the lead to 99-90.

The Pelicans got within six points on four occasions, but the Knicks answered with a basket each time.

The Knicks made five of their first seven 3-pointers to take a 21-18 lead, but missed their next four attempts.

The Pelicans took advantage with a 6-0 run featuring one basket by Jaxson Hayes and two by Williamson.

RJ Barrett converted a three-point play to even the score at 26 at the end of the first quarter.

Immanuel Quickley’s 3-pointer improved New York to 9-of-18 from beyond the arc and gave it a 45-34 lead.

Williamson had three baskets as New Orleans closed on an 18-8 run to get within 53-52 at halftime.