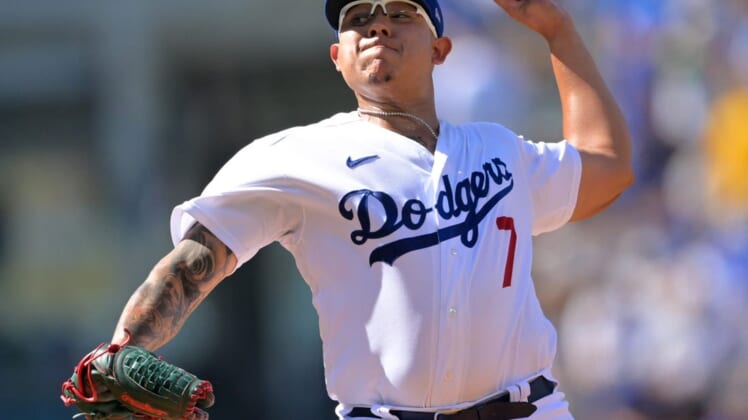 Trea Turner hit a go-ahead home run and Julio Urias did not give up an earned run over six innings as the Los Angeles Dodgers earned a 7-1 victory on Saturday over the visiting Cleveland Guardians, who saw their five-game winning streak come to an end.

Freddie Freeman had three hits and Justin Turner drove in two runs as the Dodgers won for just the third time in seven games. Los Angeles entered with two runs or less in five of the previous six games.

Amed Rosario had one of the Guardians’ two hits to extend his hitting streak to 12 games. Cleveland dropped to 4-1 on a nine-game, three-city road trip that moves to Minnesota on Tuesday.

The Guardians took an early lead in the first inning when Rosario scored after Oscar Mercado’s hard smash up the middle went between the legs of Dodgers second baseman Max Muncy for an error.

The Dodgers went up for good in the second inning. Austin Barnes had a one-out sacrifice fly to score Cody Bellinger to tie the game, while Trea Turner followed with a two-run home run, his ninth. He extended his hitting streak to 11 games, with hits in 37 of his last 38 contests.

Justin Turner had an RBI double and Gavin Lux had an RBI triple in the third inning. The Dodgers’ lead increased to 6-1 in the sixth on a bases-loaded walk by Justin Turner, and to 7-1 in the seventh after a throwing error by Guardians pitcher Nick Sandlin on a Freeman ground ball.

Guardians starter Cal Quantrill (4-4) gave up five runs on 10 hits over five innings with a walk and four strikeouts. It was the first time in 10 starts he did not last at least six innings.

Each team was without a star run producer as the Dodgers were missing Mookie Betts for a second-consecutive game because of a right rib contusion, while the Guardians were without Jose Ramirez because of a sore right thumb.