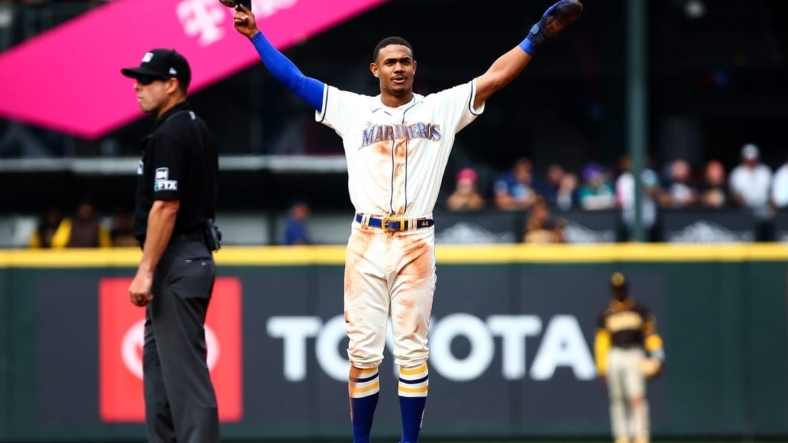 Rodriguez hit the first pitch from Padres right-hander Mike Clevenger (5-7) over the wall in left-center field for his 26th homer of the season, sparking a three-run first inning.

Rodriguez was hit by a pitch to lead off the fifth inning and proceeded to swipe second, his 25th stolen base. Arizona’s Chris Young (2007) and the Los Angeles Angels’ Mike Trout (2012) also reached the 25-25 plateau in their rookie seasons, but both had made their major league debuts a year earlier. It took Rodriguez 125 games to hit the mark, three games less than Trout — who had been the fastest to 25/25.

Rodriguez appeared to have his 25th stolen base after a one-out single in the second, but Ty France hit a soft liner to second baseman Jake Cronenworth and Rodriguez was doubled up to end the inning.

After being shut out 2-0 by Yu Darvish and Josh Hader the previous night, the Mariners jumped on Clevenger early. Following Rodriguez’s blast, France singled to right field and Suarez hit a towering shot to right-center.

Seattle doubled its lead after Rodriguez and France were both hit by pitches in the fifth. An out later, Santana went deep to right-center to make it 6-0.

Castillo (7-5), a right-hander acquired from Cincinnati at the trade deadline, allowed four hits, walked one and struck out nine.

The Padres (78-65) scored their lone run in the seventh. Wil Myers greeted reliever Penn Murfee with a double to center and, an out later, Myers scored on Jorge Alfaro’s double, also to center.