JuJu Smith-Schuster turned down more money in NFL free agency last year to remain with the Pittsburgh Steelers. With the tampering window set to open, the slot wide receiver will face another important choice in the coming days.

Smith-Schuster turned down inquiries from the Kansas City Chiefs and Baltimore Ravens in the 2021 offseason, wanting to make things work with Pittsburgh. Unfortunately, the decision backfired as his production slipped further and he spent most of the season injured.

The 25-year-old is still hitting the open market at the right time, with multiple clubs all eyeing him as a young talent with even more upside.

According to Jeremy Fowler of ESPN, the Chiefs, Philadelphia Eagles, Chicago Bears and Jacksonville Jaguars are all expected to pursue Smith-Schuster in the coming days. Additionally, a return to Pittsburgh is still possible. 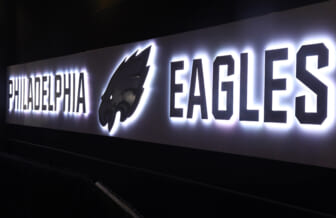 The 62nd pick in the 2017 NFL Draft might have to settle for another one-year contract. He took on a limited role his past two seasons with the Steelers, averaging just 8.6 yards per reception. However, he did average 13.7 ypc in his first three seasons.

Capable of filling multiples roles in an offense, Smith-Schuster could prove to be one of the most underrated signings this offseason if he lands in the right spot.