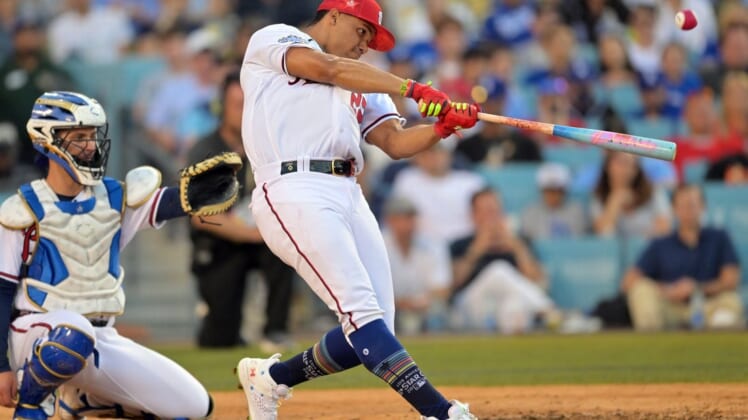 LOS ANGELES — Juan Soto put contract talks and trade rumors behind him for one night as the Washington Nationals star won the Home Run Derby on Monday at Los Angeles with a 19-18 advantage in the finals over Seattle Mariners rookie Julio Rodriguez.

Soto has been the subject of trade rumors after reportedly rejecting a $440-million contract extension.

“Right now I’m not even thinking about it,” Soto said on the ESPN broadcast. “I’m a champion and I’m a champion with the Nationals.”

Despite falling short in the final, Rodriguez went from a player to watch in the future to star of the present. The 21-year-old rookie, who has helped the Mariners to a 14-game win streak, hit 81 total home runs over three rounds. He entered with 16 home runs over his first 91 major league games.

While Soto eliminated Albert Pujols in the second round, it was the St. Louis Cardinals’ legend that received just as much fanfare. Soto pushed through with a 16-15 advantage in semifinal-round homers.

Pujols, who is set to retire after 22 seasons, played 85 games for the Dodgers last season after 10 years and 1,181 games with the cross-town Los Angeles Angels. He is back in St. Louis where he played his first 11 seasons.

Pujols, the No. 8 seed, advanced out of the first round with a 20-19 victory over top-seed Kyle Schwarber of the Philadelphia Phillies.

Other highlights of the opening round included Rodriguez’s show-stopping 32 home runs and 480-foot blast from Alonso on top of the corrugated roof that hangs over the back seats of the Dodger Stadium bleachers.

Rodriguez defeated the Texas Rangers’ Corey Seager 32-24 in the first round, while Alonso topped the Atlanta Braves’ Ronald Acuna Jr. 20-19 in walk-off fashion, Soto defeated Jose Ramirez of the Cleveland Guardians 18-17, also on a walk off.

Rodriguez’s opening-round total was the second most in a quarterfinal in Home Run Derby history.