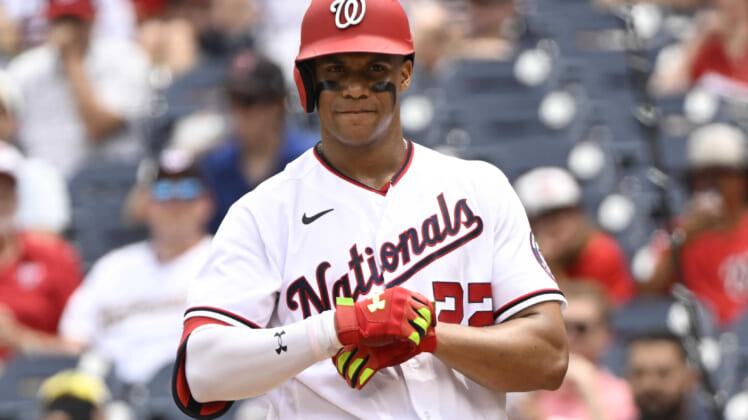 MLB is currently on their All-Star break, which means Washington Nationals slugger Juan Soto gets his second chance to partake in the Home Run Derby, which will begin at 8 PM ET. For Soto, it’s a much-need break from a grueling season that has his Nats in last place at 31-63.

Of course, everyone wants to know where Soto’s future lies after the 23-year-old outfielder rejected a 15-year, $440 million contract extension last week. With Soto and the Nationals unable to come to an agreement thus far, the next step could lead to a massive trade, which some have likened to a ‘Kevin Durant-like’ trade package.

As teams scramble to put together their best trade offers for the two-time All-Star, there’s no guarantee Soto will be on the move any time soon, if at all. He’s still under team control through 2024, meaning the Nationals have no need to rush this process.

Theoretically, trading him now should bring back the most compensation, since his new organization would be benefitting from those additional years of team control too. For some, this could be an additional motivating factor to get a deal done now. But probably not for the Nationals, who, despite their struggles, likely enjoy reaping the benefits that include having one of baseball’s best young stars on the club, whether it’s ticket sales, or memorabilia.

Then, there’s also the impending sale of the team. How does Soto’s potential trade impact the overall franchise value? I suppose part of that depends on the trade return too.

Through all of this, the Nationals will have to make a decision. Should they trade Soto now and begin the rebuild from scratch? Or do they hold on, waiting for the largest trade offer possible, while still hoping to turn things around, whether it’s their ability to compete starting in 2023, or with their Soto contract negotiations.

Whether trade or extension, maybe the Nationals and Soto have already come to an agreement?

Related: Juan Soto to the New York Yankees, how a trade might work

While everyone in the baseball community wants to know now what will happen with Soto, he shared a video on his social media, specifically on Instagram, early on Monday morning. Here’s the clip.

As you can see, it doesn’t really reveal much or give us anything to go off of.

My guess? He’s simply taking it all in, enjoying his brief All-Star break. To me, the video shows Soto enjoying his time with the Nationals. Maybe it foreshadows an eventual trade, like he knows his time with the team is nearing its end. Or maybe it’s him revealing his love for the organization, saying he doesn’t want to leave the place that helped him become one of the best in baseball. Could be anything.

Then again, maybe it’s just nothing, and we should all go back to waiting for him to launch baseballs out of this world in tonight’s Home Run Derby. Who knows.