Juan Soto on Nationals negotiations: ‘Don’t know what to trust’ 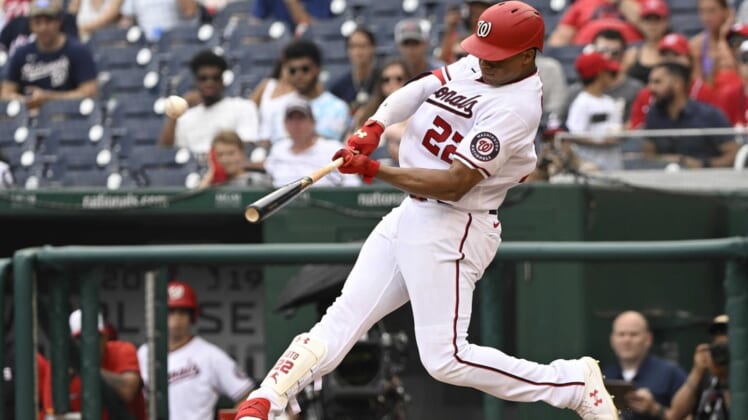 In light of a report that he turned down a 15-year, $440 million contract offer, Washington Nationals star Juan Soto faced questions about his future with the club Monday during media availability for the MLB All-Star Game in Los Angeles.

Soto called the leak “pretty frustrating” but said his motivation for now was to concentrate on baseball.

“It feels pretty tough, pretty frustrating, because I try to keep my stuff private,” said Soto, who was named to his second straight All-Star Game. “I don’t try to throw stuff out there. But it feels really bad. But at the end of the day, we just got to keep playing. It don’t matter what’s happening.”

The 23-year-old reportedly turned down an offer that would have made him the highest-paid player in baseball history, exceeding Mike Trout’s $426.5 million deal with the Los Angeles Angels. The Athletic reported that the Nationals did not include any deferred money in the offer, something that had become a sticking point in past negotiations with stars like Bryce Harper.

It was Washington’s third offer to Soto in recent months, and with Soto’s camp declining, it made the club more open to considering trade offers, per the report.

“I haven’t talked with anybody to tell me how that changed or what was the mindset,” Soto said Monday. “But definitely, it’s like you say, a couple weeks ago they were saying they will never trade me and now all these things came out. It feels really uncomfortable. You don’t know what to trust. But at the end of the day, it’s out of my hands what decision they make.”

Soto, who is represented by super-agent Scott Boras, has received National League MVP votes each of the past three seasons, finishing as the runner-up to Harper last year. In 555 career games with Washington, Soto is a .293 hitter with 118 home runs, 355 RBIs and more walks (452) than strikeouts (406).

Among the handful of clubs that could afford to make a trade package for Soto and then give them the deal he might be seeking, the New York Mets were bandied about as a potential landing spot during Monday’s media availability. Soto stayed mostly coy about his National League East rivals.

“Playing in New York against the Mets, I love it,” he said. “I love to play against them and hit the ball far. If you’ve seen my numbers at that field, it’s amazing. For me, against them it’s a great feeling.”

But some Mets All-Stars were asked about teaming up with Soto and leaned into the idea.

“I hope the Mets get a chance to get him,” closer Edwin Diaz said.

“Competing against Juan, he’s one of those guys who, since the day he walked into the big leagues and walked into that Nationals clubhouse and the show, he’s kind of taken the league by storm,” first baseman Pete Alonso said. “He’s an excellent competitor. I like him personally, but competing against him, it’s not enjoyable because typically he’s doing what Juan does.”

Whether Washington would trade Soto within the division after Harper joined the Philadelphia Phillies in free agency is another question. To this point, Soto said he has not asked for a trade.