The Washington Nationals are doing everything possible to keep star outfielder Juan Soto in D.C. for the long haul.

After previously offering the 23-year-old Soto $350 million over 13 years, the Nationals have reportedly upped the ante a ton.

According to MLB insider Hector Gomez, talks are intensifying between Soto and the Nationals with the team reportedly offering him a 13-year deal at a whopping $425 million.

With two more years of arbitration remaining until he hits free agency in 2025, there had been rumors that Washington simply might look to trade Juan Soto for what would be a record bounty. Apparently, general manager Mike Rizzo is not looking to take that drastic step. 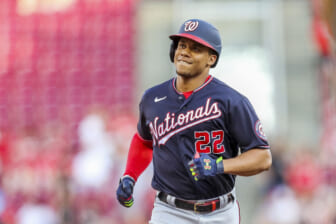 The $425 million would represent the second-highest overall value in MLB history behind Mike Trout of the Los Angeles Angels. He’s currently playing under a 12-year, $426.5 million deal. At $32.69 million annually, the latest Soto offer would make him the ninth highest-paid player on a per-year basis.

Soto and the Nationals avoided arbitration with a $17.1 million deal back in March. He’s eligible for arbitration over the next two seasons before potentially hitting free agency in 2025.

Given that Soto is represented by Scott Boras, it’s long been viewed that he’d simply play out these remaining years of arbitration and hit free agency. It’s not yet known if this offer changes things.

In five seasons with the Nationals, Soto has proven himself to be among the best players in the game.

Despite some struggles at the plate this season, the Dominican native is coming off a 2021 campaign that saw him lead the league in walks (145) and on-base percentage (.465) while finishing second in the NL MVP voting to Bryce Harper.