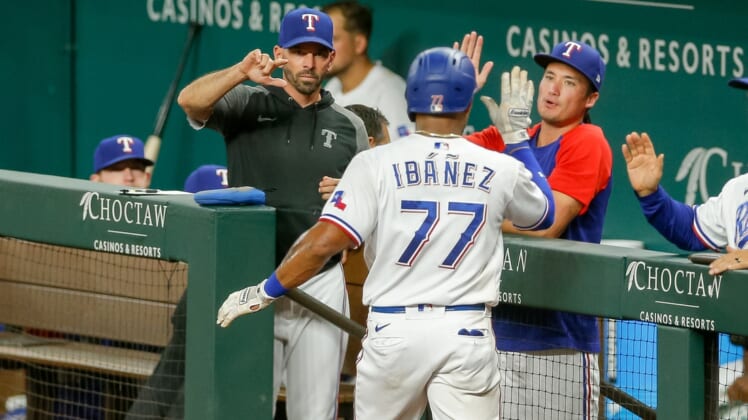 Juan Lagares had two hits and two RBIs to help the Los Angeles Angels produce a 7-2 win against the Texas Rangers on Wednesday night in Arlington, Texas.

Jack Mayfield also drove in two runs and Taylor Ward and Shohei Ohtani each had two hits and scored a run for Los Angeles (75-83).

Angels starter Janson Junk came up short of qualifying for his first major league win. He allowed two runs and seven hits in 4 1/3 innings, striking out five without issuing a walk.

Texas starter Taylor Hearn (6-6) gave up four runs and six hits in 5 1/3 innings. He fanned two and walked one.

Andy Ibanez and Jose Trevino each had two hits and a run for the Rangers (58-100).

The teams have split the first two games of a three-game series.

Mayfield, Jared Walsh and Lagares each had RBI singles in the four-run sixth inning that broke open the game.

Ohtani led off with a single, stole his 25th base of the season and scored his 100th run on a single by Mayfield for a 3-2 lead.

Walsh and Lagares added to the lead before the Angels scored another run on a Luis Rengifo groundout to make it 6-2.

The Angels tacked on their second sacrifice fly of the game in the ninth, this one from Brandon Marsh, to make it 7-2.

Los Angeles took a 1-0 lead in the first inning on a sacrifice fly by Mayfield, then made it 2-0 in the second on an RBI single by Lagares.

Junk mostly cruised through the first three innings and got the first two outs in the fourth before giving up four straight singles to plate two runs.

Leody Taveras and Brock Holt drove in runs with fourth-inning singles to tie the score 2-2.

Austin Warren replaced Junk with a runner on first and one out in the fifth, and he retired the next two batters to keep the score tied.

Jose Quijada (1-2) replaced Warren with runners on first and third and no outs in the sixth, and he struck out the next three batters to prevent Texas from scoring.

Four Los Angeles relievers combined to retire the last 12 Texas batters in the game, with Raisel Iglesias handling the ninth inning in a non-save situation.