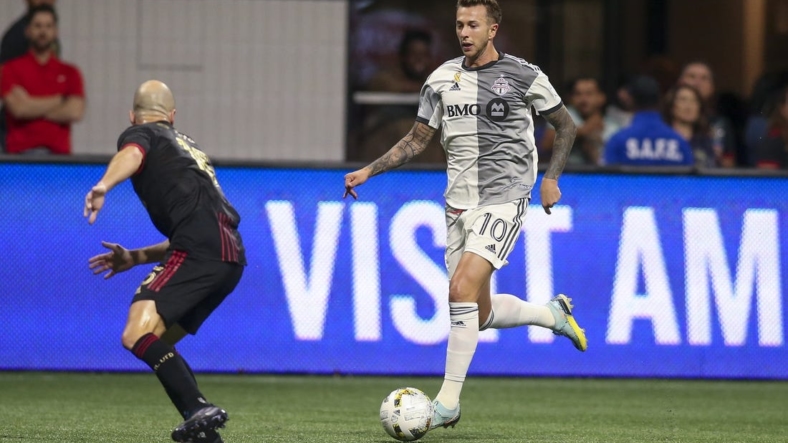 Atlanta (9-12-9, 36 points) gave their sagging playoff hopes a boost with the victory.

Purata iced the game in the 88th minute when Alan Franco headed the short corner right onto Purata’s head for his third of the game. Purata is the first player since at least 2010 to score a hat trick with all three goals coming off corner kicks.

Thiago Almada had given United a 3-2 lead in the 74th minute on a contested header.

Purata opened the scoring with his third goal of the season in the 47th minute.

Ayo Akinola initially was denied by a sliding Purata in the box. However, the ball rolled free and Atlanta goalkeeper Raul Gudino had come off his line to try to deny Akinola, who continued his run and was able to slip the ball easily into the open net to tie the game.

Atlanta earned another corner and Purata scored his second in the 62nd minute. Amar Sejdic headed the corner kick to the center of the box where Purata met it and headed it home.

Gudino now has failed to record a save on all three penalties he has faced in the 2022 season. He made no saves on the night in the win.

In the first half, it looked like Atlanta would open the scoring within the first 15 minutes.

In the 11th minute, Brooks Lennon ran into the box, then quickly cut the ball back. Toronto defender Shane O’Neill had already committed and tackled Lennon. Luiz Araujo stepped up to take the penalty against Toronto goalkeeper Quentin Westberg, making only his seventh start of the season and first since July 13th. But Westberg denied Araujo to keep the game scoreless.

Westberg made six saves in the losing effort, also keeping Almada from scoring a brace late in the game.