Joyful German Marcel Siem a surprise contender at The Open

Not many casual golf fans may know the name Marcel Siem, but once they’ve seen him, he’s hard to miss.

The German is 6-foot-2, chooses not to wear a hat over his blonde man-bun and exuberantly fist-pumps after every made putt. It’s safe to say Siem stands out from his peers at the Open Championship.

Competing in his first major since 2015, Siem has made the most of his unexpected opportunity at Royal St. George’s in Sandwich, England. Siem posted back-to-back rounds of 67 to join a tie at 6 under Friday, three strokes behind early clubhouse leader Collin Morikawa.

The way his game is going, Siem’s celebrations and emotional style could become a fixture of the weekend’s proceedings. 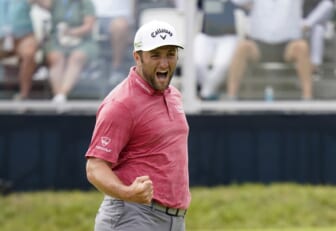 “I was always like this. I love the sport and when I do well, it just comes out. The crowd loves it. It’s nice. I love to interact with the crowd a bit.”

Ranked No. 302 in the world, Siem only qualified for the Open on Sunday when he won the European Challenge Tour’s Le Vaudreuil Challenge in France. It was his first victory on Europe’s second-tier tour; his last professional win came on the European Tour in 2014.

“I won last week, but I have to stay humble, you know?” Siem said. “I lost my card. I’m coming from nowhere. I will definitely try my best to compete but I can’t give any predictions. … I’m focused. My game is there. My putting is good.”

On Thursday, Siem’s 41st birthday, he managed five birdies en route to a 3-under 67 and celebrated with a single glass of red wine with his caddie at dinner. He went out in the early flight Friday and managed to hit 11 of 14 fairways in regulation and 13 greens — both improvements on his first round.

His putter was all that held him back from shooting lower than 67, but he made his move late with three birdies over his final five holes, including a mid-range putt on No. 18.

While acknowledging he would like to have some of those missed birdie chances back, Siem described himself for the second straight day as “very, very happy.”

As if that didn’t show with every vigorous fist pump and cheer.

“The problem is always when you do well, the fist pumps come out. When you don’t do well, there’s a bit of grumpiness as well in there,” he said.

Perhaps it foreshadowed things to come.