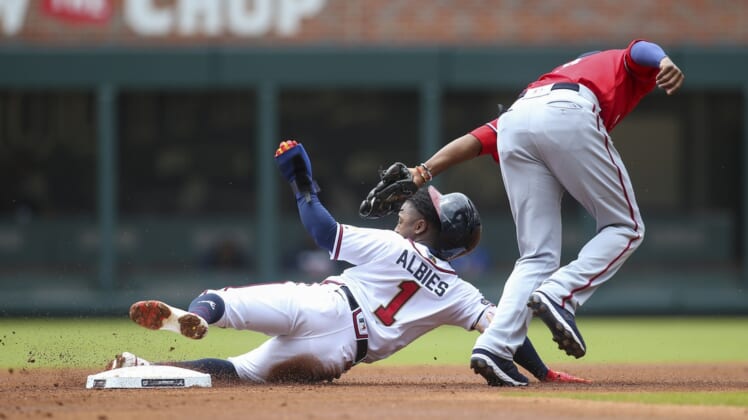 Josiah Gray pitched five shutout innings and third baseman Maikel Franco continue his hot hitting to lead the visiting Washington Nationals to a 3-1 win over the Atlanta Braves on Wednesday.

Gray (1-1) beat the Braves for the first time in three career starts. He allowed only one hit – a lead-off single to Ozzie Albies — while striking out five and walking three.

Relievers Sean Doolittle, Steve Cishek and Tanner Rainey each pitched a scoreless inning to finish the game for Washington. Rainey recorded his second save after inducing Marcell Ozuna to hit into a game-ending double play in the ninth inning.

Franco was 2-for-4 with one RBI on Wednesday. He went 8-for-13 with two doubles, one homer and seven RBIs to help the Nationals win two of the three games in the series.

The Nationals scored a pair of runs off starter Max Fried in the first inning, one coming across on Josh Bell’s infield grounder and the other on Franco’s single to center field.

Fried was struck in the left leg on a comebacker by Nelson Cruz in the sixth inning. Fried remained in the game, however, but his stay was short after allowing back-to-back singles.

The Nationals capitalized on his exit when Lane Thomas hit a sacrifice fly against reliever Collin McHugh for a 3-0 lead.

Atlanta got a run back in the bottom of the sixth when Austin Riley clubbed a solo homer to the bullpen in right-center field off reliever Kyle Finnegan. The homer was the second of the season for Riley, who notched two of his team’s three hits on Wednesday.

The Atlanta bullpen covered the final 4 2/3 scoreless innings without allowing a hit or walk.

Both teams start a four-game road series on Thursday. The Braves play at San Diego, while the Nationals are at Pittsburgh.