Joshua hopes to welcome fans for title clash against Pulev

World heavyweight champion Anthony Joshua is hopeful that boxing fans will be allowed at The O2 in London when he defends his titles... 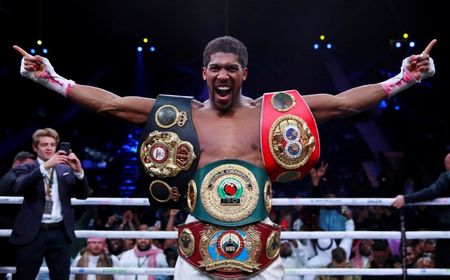 (Reuters) – World heavyweight champion Anthony Joshua is hopeful that boxing fans will be allowed at The O2 in London when he defends his IBF, WBA, WBO and IBO titles against Bulgarian Kubrat Pulev on Dec. 12.

Joshua, 31, was scheduled to defend his belts against IBF mandatory challenger Pulev on June 20 but the fight was postponed due to the COVID-19 outbreak.

The rescheduled bout will be the Briton’s first on home soil in over two years but he may have to compete behind closed doors.

“The O2 is the original lion’s den, I have a lot of history with the arena, but without the fans something huge is missing,” Joshua said.

Plans for the return fans at stadiums for elite sporting events from October were put on hold by the government amid a rise in the novel coronavirus cases in the United Kingdom.

“I am really hoping that, safety permitting, we might be able to bring some boxing fans in, but we will have to see,” Joshua added.

“I respect every opponent and I respect Pulev. I wish him well during his preparation.”

A shoulder injury forced Pulev out of a scheduled fight against Joshua at Cardiff’s Principality Stadium in October 2017 but he remains optimistic about pulling off a stunning victory.

“For a small country of Bulgaria to stand up for the heavyweight titles is a great accomplishment,” said Pulev.

“This fight is for my late father and all Bulgarians around the world! I’m coming to London to seize the heavyweight championship of the world.”

(Reporting by Hardik Vyas in Bengaluru, editing by Pritha Sarkar)