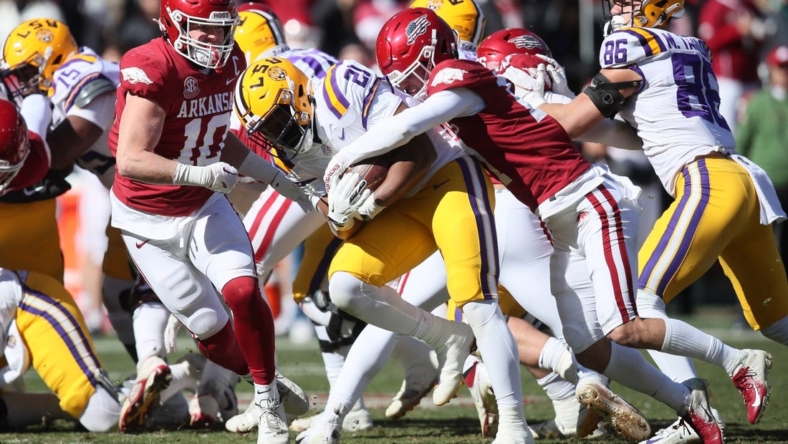 Josh Williams rushed for 122 yards and a touchdown to help No. 7 LSU record a 13-10 win over Arkansas 13-10 on Saturday in Fayetteville, Ark.

The Tigers (8-2, 6-1 Southeastern Conference) won their fourth consecutive game to move to the brink of the SEC West title. They can clinch by winning at Texas A&M in two weeks.

Arkansas (5-5, 2-4) played without starting quarterback KJ Jefferson, who has been hampered by a shoulder injury. Malik passed for 24 yards and ran for 37 before being replaced by Cade Fortin, who completed 8 of 13 passes for 92 yards and a touchdown.

Hornsby slipped and fell for a 12-yard loss while trying to avoid three LSU defenders on a 4th-and-2 play, giving the Tigers a first down at the Razorbacks’ 40.

Jayden Daniels’ 26-yard completion to Kayshon Boutte set up Williams’ 1-yard touchdown run that gave LSU a 13-3 lead with 5:25 left in the quarter.

Fortin drove the Razorbacks 94 yards, the last 40 of which came on a touchdown pass to Matt Landers that cut the lead to 13-10 with 13:17 left in the game.

Freshman linebacker Harold Perkins Jr. ended Arkansas’ final chance when he recorded his fourth sack of the game, forcing Fortin to fumble the ball that the Tigers recovered at the Arkansas 44.

The Razorbacks took a 3-0 lead in the first quarter when they drove 46 yards to set up Cam Little’s 28-yard field goal.

On the second play of the ensuing possession, Latavious Brini recovered Daniels’ fumble, setting up Arkansas at the Tigers’ 10.

On a 4th-and-goal from the 3, Hornsby was stopped for no gain, leaving the Razorbacks with a 3-0 lead at the end of the quarter.

Hornsby fumbled and BJ Ojulari recovered for LSU at the Arkansas 37. The Tigers gained one first down before Damian Ramos kicked a 38-yard field goal to tie the score early in the second quarter.