The Atlanta Falcons will sign Josh Rosen to compete for the chance to back up quarterback Matt Ryan, multiple outlets reported.

The Falcons are seeking a No. 2 quarterback after AJ McCarron was lost for the season with a torn ACL in Saturday’s 37-17 preseason loss to the Miami Dolphins. Aside from Ryan, undrafted rookie Feleipe Franks is the only quarterback on the roster.

Rosen, still only 24, was the No. 10 overall selection by the Arizona Cardinals in the 2018 NFL Draft. After Rosen’s rocky first season — a 3-10 record as a starter, 11 touchdowns and 14 interceptions — the Cardinals traded him to the Miami Dolphins and selected Kyler Murray with the No. 1 overall pick in 2019. 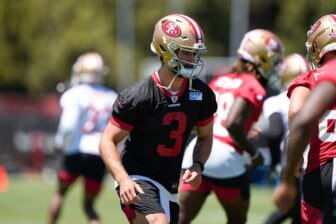 The Dolphins lost all three games he started in Miami in 2019 and released Rosen. He did not see game action in 2020, having spent most of the season on the Tampa Bay Buccaneers’ practice squad before the San Francisco 49ers signed him in December.

He was released last week.