Josh Rosen lands with the Cleveland Browns on one-year contract

Things certainly do come full circle in the NFL. Former Arizona Cardinals first-round pick Josh Rosen has found that out first-hand since he was selected back in 2018.

After spending time with five different organizations throughout his still-young career, Rosen has latched on with the Cleveland Browns on a one-year contract.

There’s multiple angles that must be looked at here. Each one is rather interesting. Cleveland’s decision to sign Rosen comes mere weeks after it traded Baker Mayfield, who was selected No. 1 overall in the very same draft that Rosen went 10th to the Cardinals.

It also comes with Cleveland bracing for a potentially lengthy suspension of recently-acquired quarterback Deshaun Watson. Watson just settled 20 civil cases with women accusing him of sexual misconduct. While the former Clemson star wasn’t charged criminally, he faces discipline from the league. A ruling should be made official at some point early in Browns training camp. It’s one of the reasons Rosen was worked out in the first place.

Josh Rosen is a mere depth addition for the Cleveland Browns

Right now, it stands to reason that veteran free-agent signing Jacoby Brissett will take over under center once a Watson suspension is announced.

With the NFL pushing for an indefinite ban, there’s also a chance that Cleveland opts to trade for someone like San Francisco 49ers quarterback Jimmy Garoppolo. Either way, the Browns would be in trouble if they had to rely on Rosen to be a starter this coming season.

A product of UCLA, Rosen spent just one season with Arizona before the team selected Kyler Murray No. 1 overall in 2019. He was ultimately traded to the Miami Dolphins during the 2019 draft, spending one season with that team. 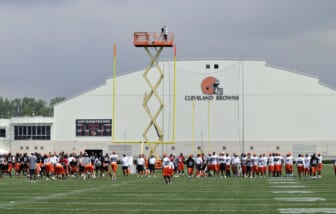 Rosen was then signed to the Tampa Bay Buccaneers’ practice squad in September of 2020 before joining the San Francisco 49ers’ active roster in December of that year. After being waived by San Francisco in August of 2021, he latched on with the Atlanta Falcons. Last season saw him throw two interceptions on 11 pass attempts with Atlanta.

Yeah, Josh Rosen is the definition of a journeyman. It’s crazy to think about given that he’s still only 25 years old.