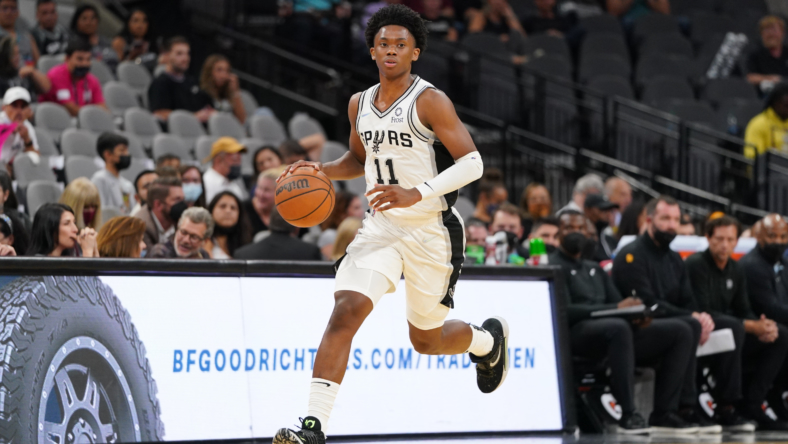 Friday brought shocking news in the form of the San Antonio Spurs waiving Josh Primo, just a year after selecting the 19-year-old wing 12th overall. Teams just don’t give up on young talent that’s still brimming with potential such as Primo. Especially so soon.

Clearly, there was a lot more we had to learn about the situation that quickly developed behind the scenes in San Antonio. Both the Spurs and Primo himself released a statement in a small effort to provide more immediate clarity for those who were curious about the situation.

Only, both of these statements were very vague and didn’t really provide much additional context. The only thing that became evident was that we would shortly be learning more about the rapid development.

According to Ramona Shelburne and Adrian Wojnarowski of ESPN, Primo’s release was due to the former Alabama product “exposing himself to women” on multiple occasions.

Making the sudden release all the more shocking was that the Spurs had just picked up their 2023-24 contract option on Primo, assuring him a $4.3 million salary. Only now, that won’t be the case.

While the on-court potential Primo offers still intrigues several teams around the NBA, clearly his issues are bigger than basketball.

As for Primo himself, here was his statement after being let go from the Spurs on Friday.

“I know that you all are surprised by today’s announcement. I’ve been seeking help to deal with previous trauma I suffered and will now take this time to focus on my mental health treatment more fully. I hope to be able to discuss these issues in the future so I can help others who have suffered in a similar way. I appreciate privacy at this time.”

Let’s hope Primo can get the help he needs, sooner than later. Unfortunately, whatever he may do in the future still won’t make up for his previous actions. Primo should have known better, it doesn’t matter how old he is.

For now, Primo has played in just 54 career NBA games.

Related: NBA Rookie of the Year 2023: Paolo Banchero proving to be a star for Orlando Magic