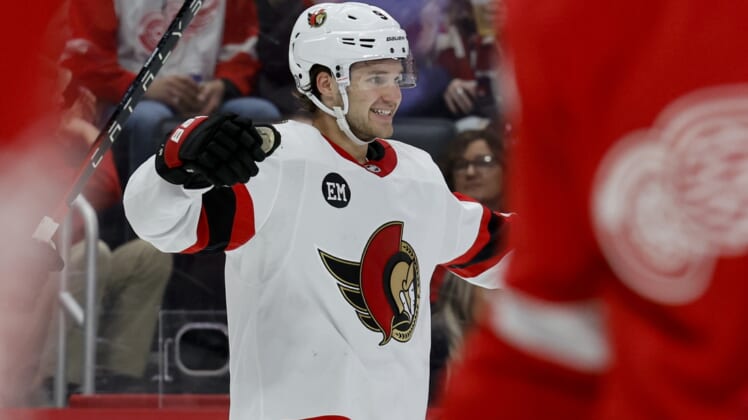 Josh Norris scored a hat trick to lift the Ottawa Senators to a 5-2 home win over the Detroit Red Wings on Sunday.

The win gave the Senators (25-37-6, 56 points) the sweep of a home-and-home series with the Red Wings after winning Friday in Detroit by an identical score.

Artem Zub and Nikita Zaitsev scored the other goals for Ottawa.

Michael Rasmussen and Dylan Larkin each scored for Detroit (26-34-9, 61 points), which has lost six straight and won just three times in its past 18 games.

The Red Wings opened the scoring with 12:39 remaining in the first on a goal by Rasmussen, who skated into the Ottawa zone unabated and fired a wrist shot from the right face-off circle past Ottawa goalie Anton Forsberg.

But Ottawa took charge after that.

The Senators tied the game at 1-1 with 1:42 remaining in the first when Zub fired a point shot from the top of the left face-off circle that went between the pads of Detroit goalie Thomas Greiss.

Ottawa then took a 2-1 lead with 17:28 left in the second on a power-play goal by Norris, who ripped a shot from the right face-off circle that got past Greiss.

Norris then struck again with 5:44 left in the second, giving Ottawa a 3-1 lead when he put home a rebound off of a point shot by Nick Holden.

The score remained that way until there was 7:25 remaining in the game, when Detroit cut Ottawa’s lead to 3-2 on a goal by Dylan Larkin, who streaked in from the left side of the Ottawa goal and placed a backhand above Forsberg’s glove and into the net.

But with Detroit’s net empty after pulling Greiss, Ottawa sealed the game up on the third goal of the game by Norris with 1:37 remaining.

It was the 30th goal of the season for Norris, a Michigan native.

Forsberg made 30 saves for the Senators, while Greiss stopped 31 shots for the Red Wings.