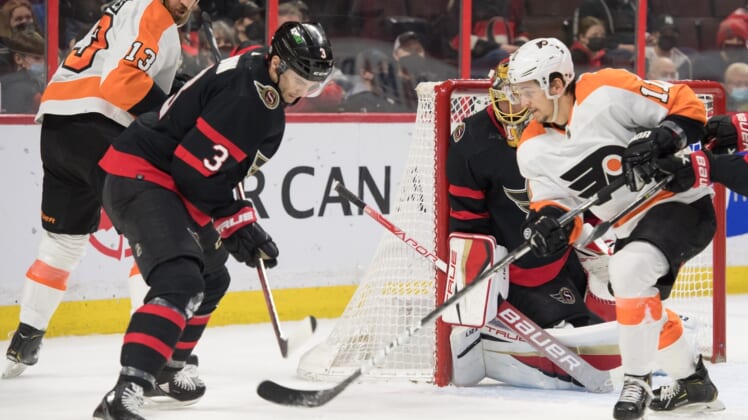 Josh Norris scored the go-ahead goal with 10:44 remaining in regulation, and the host Ottawa Senators snapped their three-game losing streak with a 3-1 victory over the Philadelphia Flyers Friday night.

On the power play, Norris one-timed pass from Erik Brannstrom from the near circle to beat Philadelphia netminder Martin Jones (34 saves) and snap a 1-1 tie with his 25th goal of the season. Tim Stutzle scored his 14th goal of the season, Alex Formenton recorded a goal with an assist and Anton Forsberg stopped 28 shots for the Senators, who won for just the third time in their last 11 games.

Meanwhile, Cam Atkinson notched his 23rd goal for Philadelphia, which is 0-10-2 on the road since a 3-2 overtime victory at Seattle from Dec. 29 — the third-longest such winless stretch in club history. The Flyers skated without star Claude Giroux, who played his 1,000th NHL game in their 5-4 win over Nashville on Thursday, but was not with the club as he awaits a potential trade before Monday’s deadline.

For a sixth straight contest, Ottawa opened the scoring. Off a stellar backhanded pass from Formenton, Stutzle skated to find a quality look at the net, then drove the puck past Jones with 9:15 left in the first period.

The Flyers tied the game with 13:50 left in the second. Justin Braun delivered a slap shot at the net, but Atkinson deflected the puck out of the air and by Forsberg.

Connor Brown recorded his second assist of the night on the go-ahead score by Norris, whose 12 power-play goals rank among the most in the NHL. Forsberg and the Senators’ defense then stepped to thwart a late Philadelphia penalty, during which Formenton delivered an empty-netter for his fourth short-handed goal of the season.

Ottawa played without key defenseman Thomas Chabot, who could miss the final weeks of the season with a fractured hand suffered in Wednesday’s 4-1 loss to Columbus.