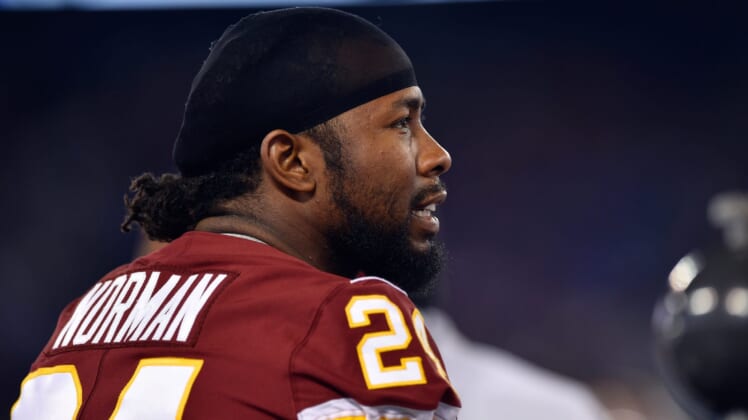 When Josh Norman was benched on Monday night against the New Orleans Saints, it was widely assumed his demotion was performance based. However, based on a report from Kevin Sheehan, who is a longtime host of Washington’s pregame show, that isn’t what caused the benching at all.

Sheehan divulged what he’d been told on his podcast Friday, per Dan Steinberg of the Washington Post.

“The reason Josh Norman was benched for the start of the second half against the Saints had very little to do with him getting lost in coverage on the record breaker, where the defense just laid down. At halftime, according to my source, he put his headphones on while the coaches were addressing the team. Jay Gruden told him to take them off. He either didn’t hear Jay or ignored him, but with that, I was told, the headphones were removed. By whom? My source says that he believes it was Gruden who removed the headphones from Norman’s head.”

That’s some serious disrespect shown by Norman toward Gruden and his coaching staff. What one would give to have been a fly on the wall during that team meeting at halftime when Gruden removed the headphones from atop his head.

Sheehan went on to say that “there is not a lot of good vibes when it comes to Norman among several of the coaches right now” and that while there’s not much they can do about that, “they’re hopeful that he acts professionally the rest of the year.”

This is not a good look from Norman here. If all this is true, then he’s completely tuning out Washington’s coaching staff, which is doubly detrimental because we’re talking about a veteran who’s supposed to be a team leader.

At this rate, it wouldn’t be surprising if this was Norman’s last year in Washington. And based on the way he’s played this year, it might be his last year in the NFL. Period.