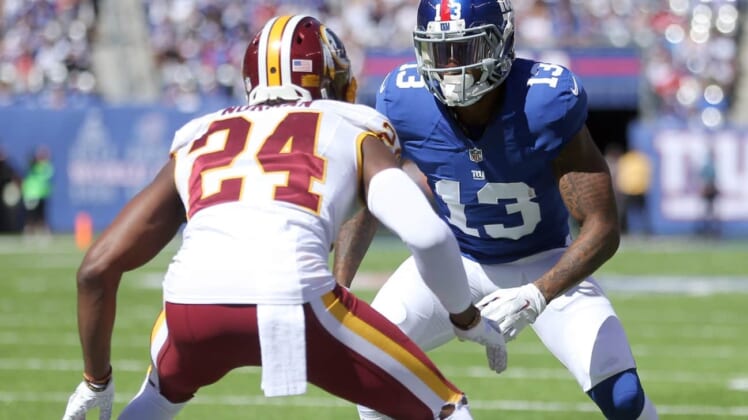 Josh Norman has never been shy about creating tension. Looking ahead to the 2017 season, he’s done it again.

Speaking with Tyler Dunne of Bleacher Report, Norman called out Dez Bryant and Odell Beckham Jr. as “just guys” who don’t allow him to battle greatness.

“He doesn’t ‘wow’ you. For me, he don’t. For other guys, he probably will do the worst to them because he’ll bully them. But you can’t bully a bully. You know what I’m saying? That’s why his game doesn’t resonate to me.”

Norman also had some interesting things to say about Beckham Jr., whom he says is “a big kid.”

“He tries to be a tough guy. He tries to put on this persona which he’s not. Because he’s always going to have his head on a swivel. Always. Always when we play each other. He’s scary like that. He does things that he normally wouldn’t do because of all the pressure and added hype that he has to put on his whole persona. He’s not this guy. If you go back and watch the games in which we play compared to the games we don’t play each other, he’s a totally different guy.”

While Norman isn’t all that high on Bryant and Beckham Jr., he did offer high praise for Julio Jones and Antonio Brown. Comparing his NFC East rivals to those two, he said, “I’m not battling against something I can call ‘greatness,'” Norman said. “I’m not enhancing my craft. Don’t get me wrong. They’re tough. But they’re not (Jones and Brown).”

The first time Norman will have a chance to back up his words in 2017 will be on October 29 when Washington hosts the Dallas Cowboys. Then we have to wait until the end of November, when in a one-week period of time we’ll get to see him take on both receivers in consecutive games. Finally, the New York Giants will host Washington on the final day of the 2017 calendar year to close out the campaign.

We can’t wait to see how Bryant and Beckham Jr. respond. It should be a blast.