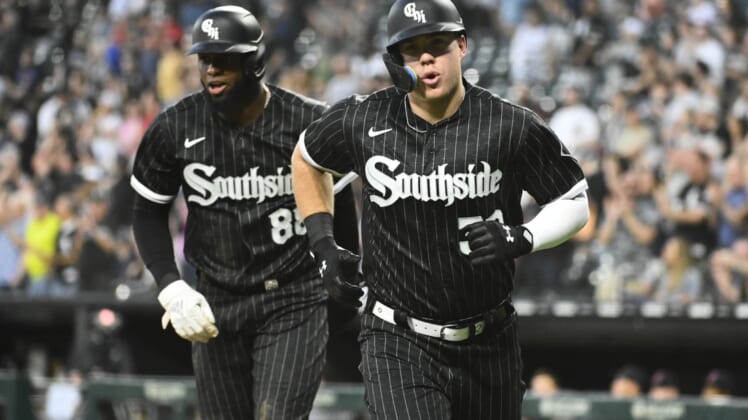 Josh Naylor went 3-for-5 with two home runs and eight RBIs, including a go-ahead, three-run blast in the 11th inning and a tying grand slam in the ninth, as the visiting Cleveland Guardians used a late eruption to defeat the Chicago White Sox 12-9 on Monday night.

Chicago pitching limited Cleveland to one run in the Guardians’ first seven times at-bat, but was unable to maintain a sizable late lead as the White Sox saw their winning streak stopped at six.

Trevor Stephan retired the side in order in the 11th to pick up the save.

Cleveland stunned Chicago with a six-run, ninth-inning rally that tied the game at 8. Andres Gimenez started the spurt with a solo home run. The Guardians then pulled to within 8-4 and, with two outs, loaded the bases for Naylor, who belted Liam Hendriks’ first pitch for a grand slam.

Gimenez lined a go-ahead double in the 10th inning as Cleveland took a 9-8 lead. Chicago promptly tied the game in the bottom half on an AJ Pollock single and Reese McGuire RBI fielder’s choice but was unable to produce the winning run after loading the bases with one out.

Gavin Sheets and Pollock each drilled three-run home runs and Michael Kopech pitched six strong innings for the White Sox, who fell to 0-4 against Cleveland this season.

Kopech lowered his ERA to 0.93 but remained without a victory following the bullpen implosion. Kopech allowed an unearned run on two hits with two walks and seven strikeouts.

Tim Anderson had an RBI double in the seventh for Chicago. Naylor doubled home a run for the Guardians in the eighth. Pollock went deep in the bottom half as Chicago capitalized on a walk and an error to enter the ninth with an 8-2 cushion.

Emmanuel Clase (1-2) was the winner, allowing one run and one hit with a walk in the 10th inning. Ryan Burr (0-1) took the loss after surrendering Naylor’s second home run and walking one in the 11th.

Chicago’s Reynaldo Lopez, who allowed a run in the 10th inning, left the game with lower back tightness after completing his warm-up pitches for the 11th.