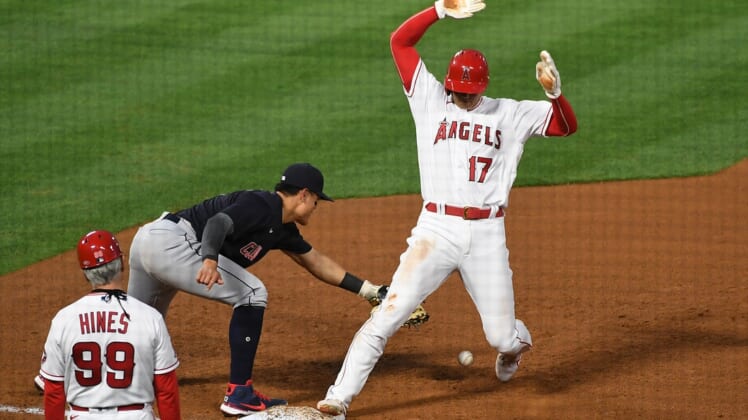 Josh Naylor’s eighth-inning home run snapped a 5-5 tie and lifted the Cleveland Indians to a 6-5 victory over the Los Angeles Angels on Tuesday night in Anaheim, Calif., ending a four-game losing streak.

The Indians jumped out to a 5-0 lead in the first inning, but the Angels rallied to tie the game on the strength of three home runs. Shohei Ohtani hit his major-league-leading 14th, Justin Upton hit a three-run homer and Jose Iglesias’ solo homer in the seventh tied the game at 5-5.

All three homers came off Indians starter Zach Plesac (4-3), who managed to pitch seven innings by keeping his pitch count under 100 (98) and earn the victory.

The Angels got four scoreless innings from reliever Jaime Barria to allow them to get back in the game, but Alex Claudio surrendered the homer to Naylor in the eighth that proved to be the difference.

James Karinchak pitched the ninth inning for Cleveland and earned his fourth save.

Starter Andrew Heaney and his Angels teammates fell into a big hole early, with the Indians scoring five runs in the first inning.

Jose Ramirez got things started with a two-run homer, his 12th homer of the season, before the Angels’ defense made things worse. With runners on second and third and one out, Harold Ramirez hit a chopper to second baseman Phil Gosselin, who booted the ball, allowing both baserunners to score and Ramirez to reach base.

Ramirez went to second on a single by Naylor, took third on a passed ball by catcher Drew Butera, then scored on a sacrifice fly by Yu Chang to make it 5-0.

The Angels got one run back in the bottom of the first inning on Ohtani’s home run off Plesac, then got to within 5-4 on Upton’s three-run homer in the fourth inning.

Plesac held onto the lead until the seventh, when he gave up a leadoff homer to Iglesias, tying the game at 5-5.