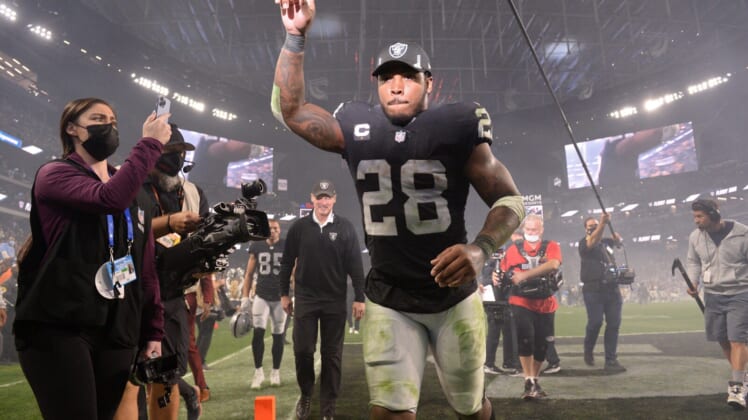 Over the last four games to conclude the Las Vegas Raiders’ regular season, running back Josh Jacobs was on another level and it was no different with the season on the line this past Sunday against the Los Angeles Chargers.

The third-year rusher totaled 26 carries for a career-high 132 yards and a touchdown, including a crucial 10-yard rush on third-and-4, which immediately led to the game-winning field goal in overtime.

It was Jacobs’ second time this season and second time in the last three games where he rushed for more than 100 yards.

Earlier in the season, Jacobs gave the Raiders and its fans a preview of how he was going to play late in the season when he recorded 22 carries for 87 yards in a 36-33 victory over the Dallas Cowboys on Thanksgiving.

By Jacobs running he ball, the team didn’t single-handedly have to rely on quarterback Derek Carr’s arm, and it helped balance out the offense to win five of their final seven games and clinch a playoff spot for the first time in six seasons.

“I remember saying, ‘Did we have to throw for 300 yards to win a football game because that what the stat said,” Carr told the media Tuesday afternoon. “Now, we can do that, or we can run the ball. We can play action; we can do a lot of different things. The more multiple you are as an offense, the better it is for your team.”

A big part to Jacobs’ success has been the consistency of the offensive line.

Since early October when rookie Alex Leatherwood moved from right guard to right tackle and Brandon Parker was inserted to right guard, time has benefitted this team in the long run and during the late season playoff push.

“The continuity that we’ve always talked about, having the group play together and that’s certainly helped Josh’s running right now,” offensive coordinator Greg Olson said Wednesday. “It’s experience of playing behind that group and trust within that group. Both the experience and the trust factor that we talked about a few weeks ago, I think there’s a lot more trust, a lot more belief in one another and they understand the importance of running the football this time of year. It’s more of a commitment on everybody’s part.”

Despite being limited to chest, foot and rib ailments this season, Jacobs still found a way to fight through the injuries and average more than four yards per carry. 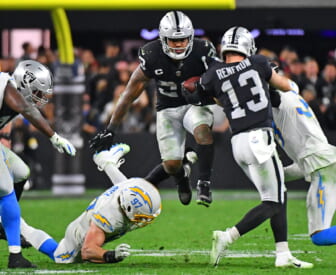 Also Read:
Why Raiders should feel good about the playoff matchup with Bengals

Entering Sunday, Jacobs averaged 3.87 yards per carry this season. With his 132 yards, he increased his season yards per attempt total to 4.02 and above four for the second time in his career. (Jacobs recorded 3.9 yards per rush in 2020)

With the No. 5 seed in the AFC playoffs, Jacobs and the Raiders hope to continue the season and get past the No. 4 Cincinnati Bengals on the road.

Jacobs will have a tough task in front of him as Cincinnati allows the fifth fewest rushing yards this season.

The Bengals’ rushing defense was on display when they came to Allegiant Stadium back in November. Jacobs recorded nine carries for 37 yards in addition to five receptions for 24 yards.

Despite the challenge on Saturday, Jacobs does not want to only see success on the field, but also through his voice as a leader for his teammates.

Jacobs, who was part of the Raiders’ 2019 draft class that also includes wide receiver Hunter Renfrow and defensive end Maxx Crosby, said that draft class from three years wanted to make a difference not just for this season, but for the playoffs and years to come.

“Our class, definitely, has played a big role in the things we’re accomplishing,” Jacobs said after Sunday’s 35-32 win. “We sat down in that room, it was just us, and we looked at each other and we said, ‘We got to be the guys that change this culture, change this franchise and bring it back to what it used to be.’ It’s been a lot of ups and down, but we kept believing in each other.

“You see Maxx and you see Hunter; you see all our guys in our class making plays. We have the ultimate confidence in each other. We just want to keep continuing to put it together.”

Crosby was named AFC Defensive Player of the Week for the second time this season on Wednesday, while Renfrow was one of 24 NFL wide receivers to accumulate 1,000 yards.

Jacobs and the No. 5 Raiders face the No. 4 Cincinnati Bengals on Jan. 15 at 1:30 p.m. at Paul Brown Stadium to kick off Wild Card Weekend.