Josh Hart erupts for 44 points to lead Blazers past Wizards 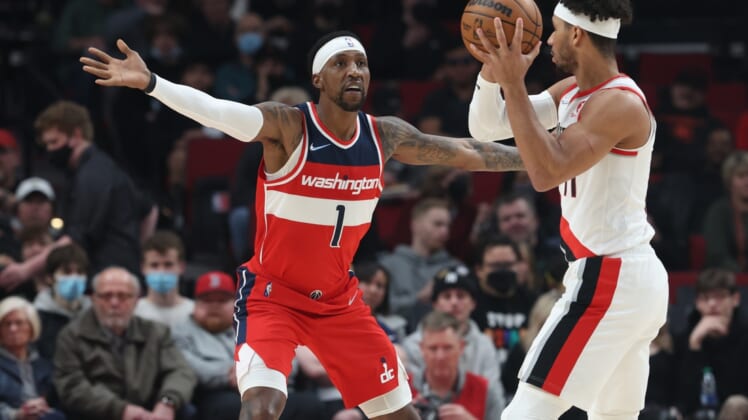 Josh Hart scored 28 points in the first half and finished with a career-high 44 as the Portland Trail Blazers ended their six-game losing streak with a 127-118 win over the visiting Washington Wizards on Saturday.

Washington lost its third straight despite a strong outing from Kentavious Caldwell-Pope, who scored 26 points, including five 3-pointers. Kyle Kuzma scored 22 points while Corey Kispert had 15, Daniel Gafford added 14, and Rui Hachimura had 12.

Hart was 15-of-21 shooting from the field, including 6 of 9 from 3-point range. The fifth-year pro added eight rebounds, six assists and a career-high four steals for Portland, which led by as many as 22 early in the third quarter.

Washington outscored the Blazers 37-31 in the third quarter to cut the gap to 103-91. Kuzma scored nine points in the period.

Thomas Bryant made two foul shots to pull the Wizards within 109-102 with 8:02 remaining before Portland responded with an 18-8 run to squelch the comeback attempt.

The Blazers recovered from an early 11-4 deficit and took a 38-26 lead into the second quarter after shooting 64 percent from the field.

Hart and Watford scored 11 points apiece in the first quarter for Portland, which stretched its lead to 66-46 after Williams hit a 3-pointer with 3:17 left in the half.

Hart finished the first half shooting 10-of-14 from the field, including 5-of-8 from beyond the arc.

Portland scored more than 100 points for just the second time in its last seven games and outscored Washington 70-42 in the paint.

Ish Smith scored 10 points for the Wizards, who made their first 24 foul shots and finished 26 of 27 from the line.

Washington center Kristaps Porzingis sat out after recording 14 points and a season-high 14 rebounds in a 122-109 loss to the Los Angeles Lakers on Friday.