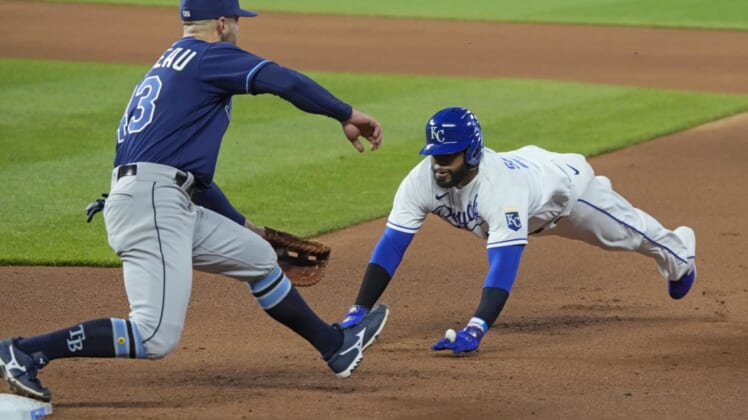 Tampa Bay pitchers shut down the Kansas City offense as the Rays defeated the Royals 4-1 on a blustery, cold Monday night in the first game of a three-game series in Kansas City. The Royals managed just five hits.

The game-time temperature was 45 degrees, with a wind chill of 39 due to an 18-mph wind out of the north. The wind chill was in the upper 20s by the end of the game.

Starting pitcher Josh Fleming (1-1) allowed no runs on two hits in 5 1/3 innings for Tampa Bay, lowering his ERA to 0.87. He only allowed three baserunners, none past the second, and never more than one in an inning. He kept the Royals off-balance mostly with a mix of cutters and sinkers.

Danny Duffy (2-1) took the loss for the Royals. He was nearly unhittable early. When he struck out Manuel Margot in the fourth inning, he had his sixth of the game, and 1,000th of his career. He became the sixth pitcher in Kansas City history to achieve that milestone.

Duffy had his third straight quality start. He’s allowed one earned run in 18 innings over three starts (0.50 ERA). He allowed two runs (none earned) on four hits in six innings Monday. He struck out eight and walked two. Hitters are 3-for-35 with two strikes this season against Duffy.

The Rays finally crossed home plate in the fifth, beginning with an error by Carlos Santana. With two outs, Willy Adames’ high popup in the wind eluded Santana and Joey Wendle scored from first. Kevin Kiermaier followed with an RBI single.

Tampa got an insurance run in the seventh on an error by Whit Merrifield. The damage could have been worse, but Tyler Zuber retired three straight Rays batters after coming in with first and third and no outs.

The Rays’ final run came on another RBI single by Kiermaier.

The Royals got a run in the ninth on a sacrifice fly by Jorge Soler.