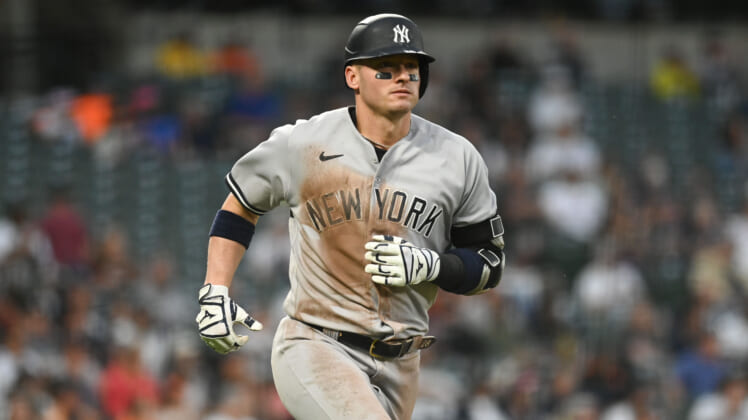 New York Yankees slugger Josh Donaldson was in the midst of a near brawl against the Chicago White Sox this past Saturday.

The confrontation with Tim Anderson of the White Sox escalated in the third inning as Donaldson called Anderson “Jackie” in reference to all-time great baseball player Jackie Robinson.

An Africa-American, Anderson took exception to the comments at the time. His White Sox teammates called them racist while Donaldson defended himself by referencing a 2019 Sports Illustrated article in which Anderson referred to himself as the “modern-day” Jackie Robinson.

Two days after the incident, and MLB has handed Josh Donaldson a one-game suspension for his remarks.

“MLB has completed the process of speaking to the individuals involved in this incident. There is no dispute over what was said on the field. Regardless of Mr. Donaldson’s intent, the comment he directed toward Mr. Anderson was disrespectful and in poor judgment, particularly when viewed in the context of their prior interactions.

In addition, Mr. Donaldson’s remark was a contributing factor in a bench-clearing incident between the teams, and warrants discipline.”

Donaldson, who is currently on the COVID-19 list, is already out for Monday evening’s game against the Baltimore Orioles. He is appealing the one-game ban.

For his part, Donaldson did issue an apology while also noting that he didn’t mean any disrespect. Anderson and the White Sox don’t see it in the same manner.

In his first season with New York, the former American League MVP is hitting .238 with five homers and 15 RBI in 37 games. As noted, he’s currently sidelined while on the COVID list. Once he returns, the slugger will either serve his suspension or be granted his appeal.