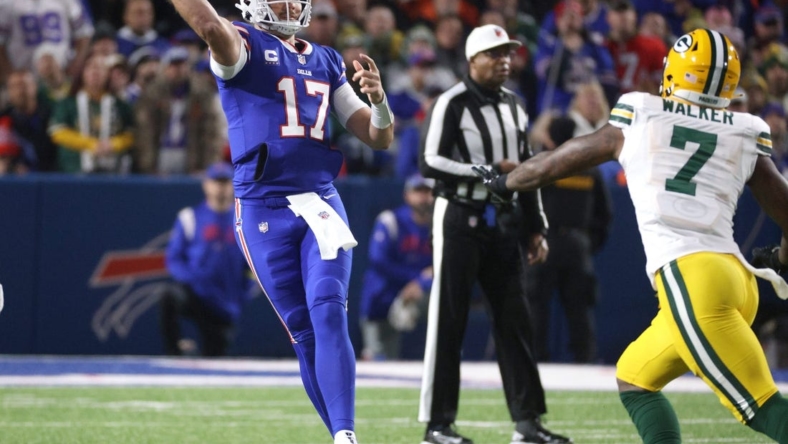 The Buffalo Bills reside atop the NFL in a number of offensive categories this season, including average passing yards and total yards per game.

The high-octane Bills (6-1) look to continue to run roughshod over their opponents on Sunday when they visit the New York Jets (5-3) in East Rutherford, N.J.

Josh Allen boosted his passing touchdown total to an NFL second-best 19 after throwing for two scores in Buffalo’s 27-17 victory over the Green Bay Packers last Sunday. Allen’s 2,198 passing yards rank third in the league this season.

While Allen has provided fits to the opposition this season, he was quick to hand out verbal bouquets toward the Jets’ sixth-ranked defense on Wednesday.

“C.J. Mosley is playing at a high level again, and if you look at their interior D-line with Quinnen Williams, he’s one of the most — if not the most — disruptive interior linemen in the game right now,” Allen said. “… They’ve got some young guys flying around, look at the corners (with) their high draft pick in (Sauce) Gardner — he’s playing really well right now.”

Williams was more than willing to return the admiration for Allen.

“He can stiff-arm, can run the ball, can jump, can hurdle. He’s basically a running back that can throw the ball real good. He’s an elite quarterback,” Williams said. “… Going against him is going to be a big challenge.”

While Allen is at the controls of the NFL’s top passing offense (307.7 yards per game), Stefon Diggs has proven to be his most trusted target. Diggs is tied for the league lead with seven receiving touchdowns, rests second in receiving yards (764) and third in catches (55).

Diggs had a team-leading six receptions for 108 yards and a touchdown last week. He has recorded at least six catches in all five of his career games versus the Jets.

Diggs is not alone, either. Gabe Davis is second on the team in both receiving yards (418) and receiving touchdowns (four).

“It’s going to be a great challenge because Gabe Davis is a lot better than he was a year ago. Stefon, goes without words,” Jets coach Robert Saleh said. “… It’s going to (be) our biggest challenge to date, but I do think it’s a challenge that our guys are ready for.”

Devin Singletary totaled three touchdowns in two meetings with New York last season. He found the end zone in the Bills’ 45-17 romp in New Jersey on Nov. 14 before adding both a rushing and a receiving touchdown in Buffalo’s 27-10 win at home on Jan. 9.

It’s not certain what — if any — impact fellow running back Nyheim Hines will make this weekend after he was acquired from the Indianapolis Colts prior to the trade deadline.

Zach Wilson is looking to atone for a three-interception performance last Sunday as New York saw its four-game winning streak come to a halt with a 22-17 loss to the New England Patriots. He has completed just 54.9 percent of his passes and has been picked off five times.

Garrett Wilson had six catches for a season-high 115 yards last week. His 34 catches through eight games are tied for the most by a Jets rookie with Wayne Chrebet (1995).