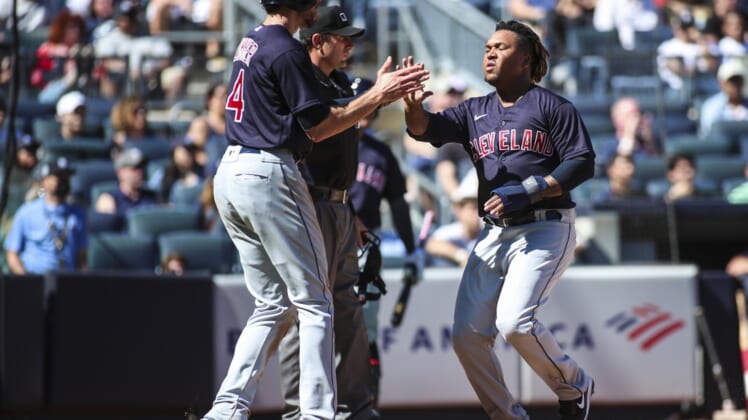 Jose Ramirez homered to highlight a four-hit performance as the visiting Cleveland Indians cruised to an 11-1 win over the New York Yankees on Sunday.

Ramirez drove in three runs and reached base five times for the Indians (73-74).

Harold Ramirez drove in a career-high four runs by hitting a pair of two-run singles in his first two at-bats off Gerrit Cole. Ramirez exited with a shoulder injury in the third inning while attempting to make a leaping catch at the right field fence on a homer by Gio Urshela.

Roberto Perez added an RBI single and a solo homer as the Indians reached double-digit runs for the third time in four games.

Cole allowed a season-high 10 hits and was visibly frustrated all afternoon. He finished with seven strikeouts, walked one and heard some boos when he was replaced by Lucas Luetge.

Indians rookie Eli Morgan (3-7) allowed one run on six hits in six innings. He struck out three, walked none and threw 85 pitches.

Cleveland won the series after dropping the opener 8-0 on Friday. The Indians outscored the Yankees 22-4 in the final two games and collected 16 hits Sunday.

Cleveland loaded the bases on an infield single by Bobby Bradley and went up 2-0 when Harold Ramirez singled down the right field line. Harold Ramirez made it 4-0 when he hit a sinking liner that dropped when left fielder Brett Gardner cut in front center fielder Aaron Judge.