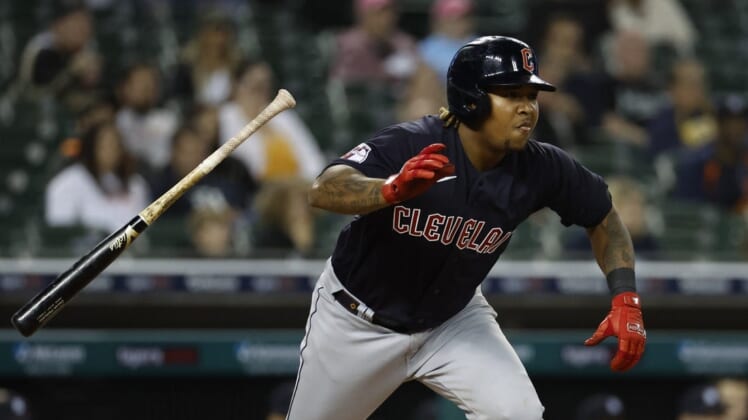 Jose Ramirez is averaging more than one RBI per game this season.

The Cleveland Guardians’ slugger will try to keep that pace going in the finale of a three-game series in Detroit on Sunday.

Ramirez drove in five runs — with a three-run triple and a two-run homer — in Cleveland’s 8-1 victory Saturday. He has 48 RBIs in 42 games, along with 12 home runs. He’s driven in 14 runs over his last seven games.

“He’s one of the best players in the game, across the league, across the board,” Hinch said. “He’s very dangerous. He controls the strike zone, he’s got power, speed, defense — All-Star player every year. He demonstrated all of that today.”

Right-hander Triston McKenzie (3-3, 2.70 ERA) will make his eighth start of the season for the Guardians. McKenzie has lasted at least six innings in all four of his May starts, including back-to-back seven-inning outings in his last two appearances.

“Used the fastball early and mixed in some curveballs later and just tried to keep them off balance,” McKenzie said. “That’s a good lineup, top to bottom. We were just trying to figure them out and execute my stuff.”

McKenzie has always been a thorn in Detroit’s side. Last August, he carried a perfect game into the eighth inning and struck out 11. A single by Harold Castro with two outs in the eighth spoiled McKenzie’s bid for perfection.

In four career starts against the Tigers, McKenzie is 2-0 with an 0.78 ERA. He hasn’t put up big strikeout totals this season — his high is seven — but he’s been very effective.

“It’s more about just being in the zone and letting the hitters put the ball in play and letting my guys work behind me,” he said.

He’ll be opposed by rookie right-hander Elvin Rodriguez (0-0, 9.39), who made his first major league start on Monday. He gave up a first-inning grand slam to Minnesota’s Max Kepler, then settled down and tossed four scoreless innings before departing.

“I wasn’t nervous or jittery,” Rodriguez said. “I was trying to be too perfect in what I was trying to do. I was trying to paint my pitches and be more precise than I needed to be. … My biggest memory is going to be the adjustments I made after the first inning to keep my team in the game. That’s what will stay with me.”

The Tigers may not have Miguel Cabrera for Sunday’s game. The veteran designated hitter experienced back stiffness on Saturday and was removed for a pinch hitter.

The series marks the start of an eight-game homestand for Detroit. Cleveland can finish a six-game trip at 3-3 with a win on Sunday.