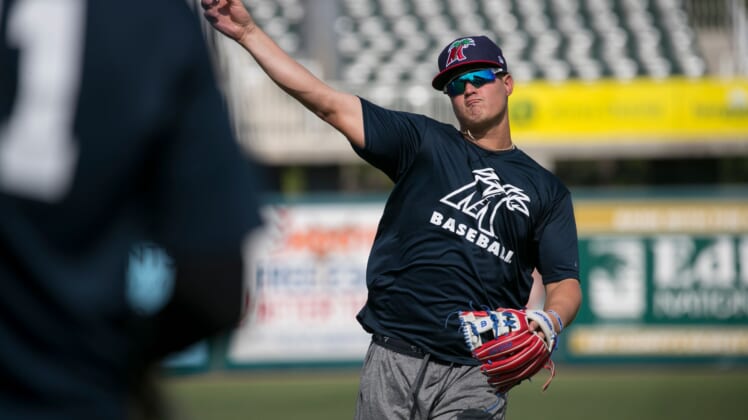 Top Minnesota Twins prospect Jose Miranda absolutely tore the cover off the baseball during his stints in Double-A Wichita and Triple-A St. Paul a season ago.

While the 23-year-old infielder and Puerto Rico native struggled early this season in the minors, he’s now getting the call to the big league club.

According to the Twins themselves, Miranda has been called up from the minors and will make his MLB debut Monday against the Baltimore Orioles in Maryland. He’s slated to bat sixth and play third base.

The decision to call up Jose Miranda from Triple-A comes on the same day that Minnesota placed first baseman Miguel Sanó and outfielder Kyle Garlick on the 10-day injured list.

Jose Miranda could be with the Minnesota Twins for good

According to MLB.com, Miranda entered the season as Minnesota’s No. 3 prospect. The outlet also has him as the 95th-best prospect in all of baseball.

A second-round pick of the Twins out of Leadership Christian Academy in Puerto Rico back in 2016, it’s been a slow ascension up the minor league ranks for Miranda. He didn’t reach Double-A ball until 2019 and was impacted by the 2020 MILB season being canceled due to the COVID-19 pandemic. However, the infielder jumped out big time between Double-A and Triple-A a season ago.

He struggled to an extent in 21 games with Triple-A before being called up — hitting .256 with two homers, 12 RBI and a .737 OPS. Despite this, there’s no real concern that these struggles will continue in the bigs.

“Miranda has always been a contact machine with a very low whiff rate. In 2021, he was much more selective, drawing more walks and working counts in his favor, which allowed him to use his plus bat-to-ball skills to drive the ball much more frequently and finish with 30 or more doubles and homers for the season.

The power came without a sacrifice in terms of strikeouts as he whiffed in just 12.5 percent of his plate appearances. He rarely misses a fastball, and he registered above-average exit velocities during his time in Triple-A.”

The cousins of Lin-Manuel Miranda will now get his chance to help a Twins team that boasts a 13-9 record and currently sits in first place in the American League Central.