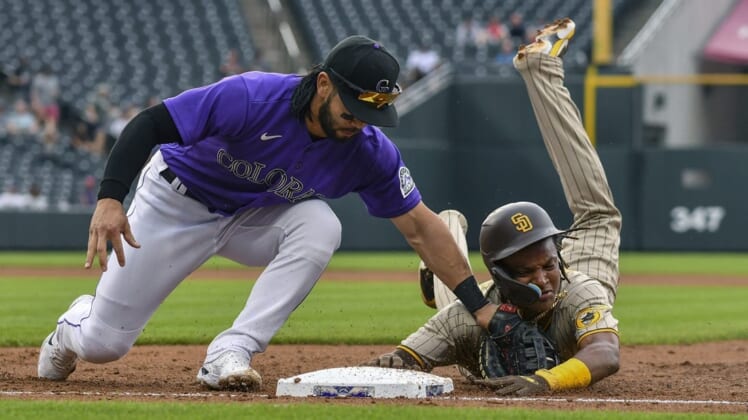 Jose Iglesias homered among his three hits and drove in a career-high six runs, Sam Hilliard had three hits and the Colorado Rockies beat the San Diego Padres 10-6 in Denver on Wednesday night.

Randal Grichuk, Ryan McMahon, Charlie Blackmon and Elias Diaz each added two hits, and Robert Stephenson (1-1) tossed an inning of relief for the Rockies to pick up the win.

Jake Cronenworth homered and doubled, and Eric Hosmer and Nomar Mazara each had a pair of hits for San Diego.

Cronenworth’s homer in the first put the Padres ahead 1-0, and they added two more runs off starter Chad Kuhl in the fifth. Kuhl walked Cronenworth, gave up a single to Manny Machado and then walked Mazara and Hosmer to bring in another run.

Jhoulys Chacin relieved Kuhl and walked Ha-Seong Kim to plate another to make it 3-0.

Colorado rallied against starter Joe Musgrove in the bottom of the inning. Hilliard and Garrett Hampson led off with singles, and Connor Joe doubled to left to drive in Hilliard.

Hampson scored on a groundout and Joe moved to third on a single by Blackmon before scoring on a sacrifice fly.

The Padres responded with a rally of their own in the sixth. Trent Grisham walked and scored on Cronenworth’s double, and Mazara and Hosmer had RBI singles off Jake Bird to make it 6-3.

Colorado answered in its half of the sixth. Diaz doubled and moved to third on Hilliard’s single, which ended Musgrove’s night.

Hampson hit a grounder to first and Hosmer came home with the throw. Diaz was ruled out for running outside the baseline and manager Bud Black was ejected after arguing the call.

Iglesias then tied it with his third homer of the season off Nabil Crismatt.

Colorado went ahead in the seventh off Tayler Scott (0-1) on an RBI single from Hilliard and a two-run single by Iglesias.

The Rockies scored again in the eighth on a double-play groundout.