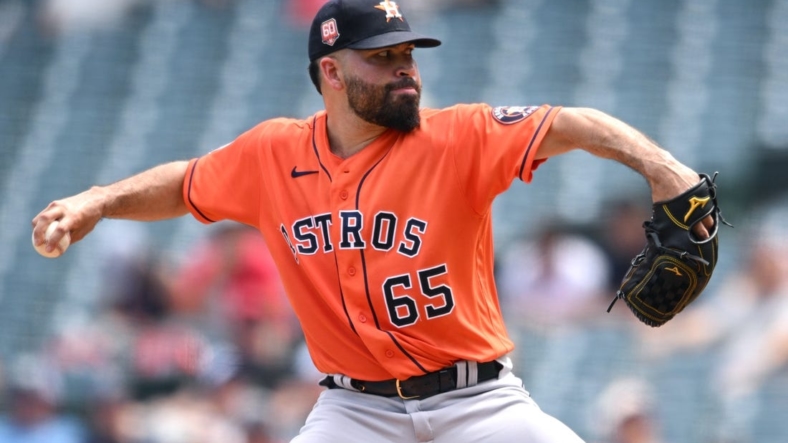 Jose Altuve had three hits and three RBIs and Jose Urquidy threw seven scoreless innings to lead the Houston Astros to a 9-1 victory over the Los Angeles Angels Sunday afternoon in Anaheim, Calif.

The Astros scored five runs in the second inning off Angels starter Tucker Davidson to set the tone for the game and give Urquidy room to work. The Astros right-hander made 111 pitches in seven innings despite the heat — game-time temperature at first pitch was 102 degrees.

Urquidy (13-5) gave up just four hits, walked one and struck out eight. The Angels’ best chance to score against him came in his final inning of work when a single by Mike Ford and double by Jo Adell gave the Angels runners on second and third with one out.

But Urquidy responded by striking out both Ryan Aguilar and Chad Wallach to escape.

The Angels also had a scoring opportunity in the third inning when they had runners on first and third with one out and Mike Trout coming to bat. But Urquidy retired Trout on a foul popup and No. 3 hitter Luis Rengifo on a grounder to first to get out of the inning.

Shohei Ohtani, who made 111 pitches and batted five times on Saturday night, was given the day off.

Tucker’s two-run homer off Davidson got the Astros started in the second inning, and they didn’t stop there. Yuli Gurriel singled, Mauricio Dubon was hit by pitch, and both scored on a double by David Hensley.

Altuve followed with an RBI double to make it 5-0.

Davidson (2-5) was able to find a rhythm and put up zeroes over the next four innings, but gave up the two-run homer to Altuve with one out in the seventh.

Trout homered in the eighth inning off Astros reliever Brandon Bielak for the Angels’ lone run. It was Trout’s 29th homer of the season and 339th of his career, tying him with Tino Martinez, Dave Parker and Boog Powell for 104th on the all-time list.