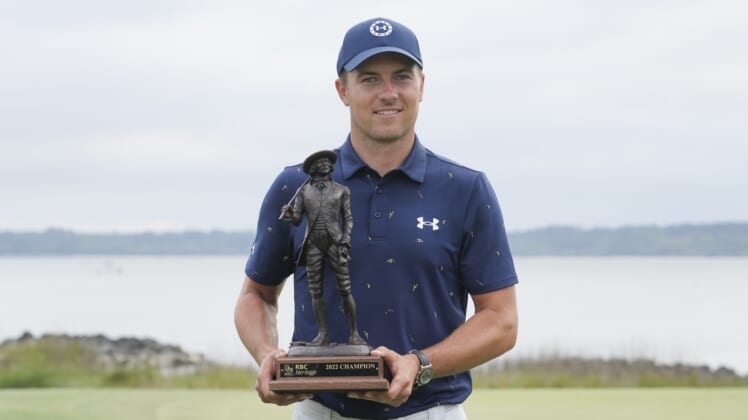 Jordan Spieth hadn’t won since Easter Sunday of 2021. His first career missed cut at the Masters raised reasonable questions about whether the three-time major winner was headed for another slump.

But Spieth bounced back from his Masters letdown and won on Easter for the second straight year, this time taking the title at the RBC Heritage, which boosted him 10 spots in the Official World Golf Ranking on Monday from No. 20 to No. 10.

It’s his first appearance in the top 10 since the end of the 2017-18 PGA Tour season. He started that season ranked second in the world and wound up 10th.

Spieth shot a final-round 66 early Sunday afternoon to set the clubhouse lead at 13-under 271 while much of the field was still playing. Only Patrick Cantlay managed to match Spieth, who returned to the course and defeated Cantlay on the first hole of a playoff.

The missed Masters cut might have driven Spieth at Harbour Town Golf Links.

Spieth went three years and nine months between victories after winning the 2017 Open Championship. His standing in the OWGR plummeted as far as 92nd as he struggled with his game.

After breaking the drought by winning the Valero Texas Open last year, Spieth contended at the Open at Royal St. George’s and finished second behind Collin Morikawa. Now Spieth can add his 13th PGA Tour victory to his trophy case — his first as a father.

“It was really amazing,” Spieth said. “We’ve traveled with (baby) Sammy the whole year, and fourth week in a row he’s been a champion sleeper, and I think that was the difference maker.”

Cantlay took second place for the second time this season after winning the FedEx Cup in 2021. It pushed him up two spots in the world ranking to No. 4, surpassing Viktor Hovland of Norway (now fifth) and Cameron Smith of Australia (now sixth).

Shane Lowry of Ireland was one of seven golfers tied for third, one stroke behind Spieth and Cantlay. Lowry, who finished second earlier this season at the Honda Classic and tied for third at the Masters, moved up three spots to No. 27 in the world.

Harold Varner III, who shot 63 on Saturday to hold a one-shot lead after 54 holes, also tied for third. He rose three spots to a career-best ranking of No. 36.