Jordan Spieth holds on to lead at Pebble Beach 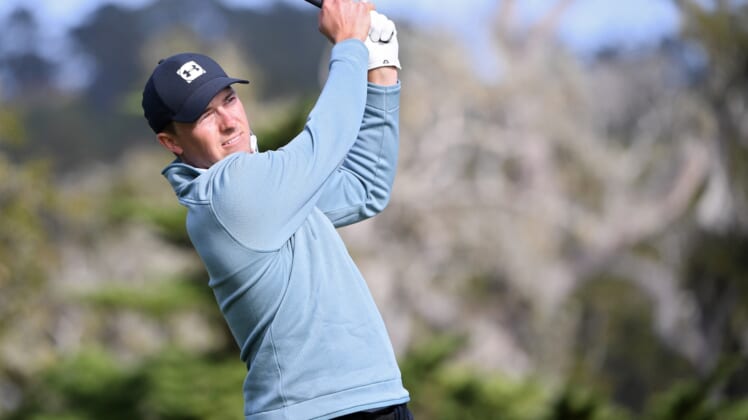 Despite finishing just 1-under on the day, Jordan Spieth managed to hold on to his lead and even separate himself slightly from the pack on Saturday at the AT&T Pebble Beach Pro-Am in Pebble Beach, Calif.

As the tournament moved exclusively to Pebble Beach Golf Links for the weekend, Spieth capitalized on his second hole-out eagle of the tournament — a 160-yard shot from the fairway on the par-5 No. 16 — to shoot 71 and move to 13 under, 203 total, and take a two-shot lead over a five-pack of players at 11 under that includes Nate Lashley (68), Tom Hoge (68), Patrick Cantlay (70), Daniel Berger (72) and Scotland’s Russell Knox (69).

Hot on their heels at 10 under and tied for seventh place is a formidable foursome that includes Australia’s Jason Day (68), Brian Stuard (69), Maverick McNealy (69) and England’s Paul Casey (71).

The 27-year-old Spieth, coming off his best result in nearly a year, tied for fourth place in the Waste Management Phoenix Open last week. It was his first top-10 finish since he tied for ninth at Pebble Beach in 2020 and his first top-20 result since the Memorial last July.

It was a tale of two nines for Spieth, who won the 2017 Pebble Beach event for one of his 11 career PGA Tour victories but hasn’t prevailed since capturing the 2017 Open Championship. After a bogey on No. 2, he rebounded with birdies on Nos. 4, 6 and 9 before giving them all back with bogeys at Nos. 10, 12 and 14.

Berger was tied with Spieth at 13 under going into 18 but dropped two shots with a double bogey and finished even par for the day.

Kevin Streelman shot a bogey-free 67 to record the low round of the day. He started on the back and notched four birdies before posting one more after the turn and stands tied for 13th place at 8 under.

Defending champion Nick Taylor of Canada posted an even-par 72 and stands tied for 34th at 4 under.