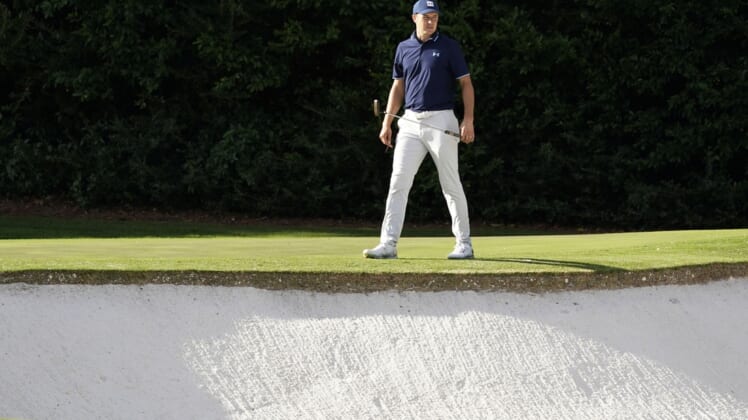 Jordan Spieth landed at Augusta National for the 2021 Masters on Monday, hours removed from his first win since 2017.

Already his energy and focus shifted from claiming the Texas Open to mastering the greens this week in Georgia. If he continues to putt with the same success he did last week, Spieth fully expects to be in contention on Sunday.

Then, the chatter about his trophy drought might subside.

“I think I’ve learned a lot of patience,” Spieth said, shrugging off questions about resisting firing his personal coach and caddie as is common when wins become elusive on Tour. “I probably spent a year of struggling where I was forcing a lot of things, and it just made it worse. But it was just kind of hard not to force it because I just wanted to be back to playing good golf so quickly without really — sometimes less is more.

“I think it’s a new — I’m not a very patient person in general, and I think having to kind of learn patience through struggles is massively important, where taking a step back and maybe taking a full month away from the game and kind of coming back with a new game plan and new set plan and sticking to it versus when you don’t take that time off, a lot of times you go almost day-to-day or week-to-week and you’re changing swing thoughts or you’re swinging your attitude.

“I think the less is more and the patient mentality.”

Spieth said he doesn’t hear a lot of the chatter about his now-ended winless streak — 1,351 days between wins — because he learned to block out “the noise” from Bill Belichick, head coach of the New England Patriots, prior to the 2016 Ryder Cup. Spieth remained even-keeled outwardly but confessed on Monday afternoon losing brought plenty of introspection.

“I think I needed to look back and take responsibility. It’s part of the game,” Spieth said. “Some people on certain levels and some people on others. I mean, it’s not like I lost my TOUR card. I just wasn’t winning three times a year. … For me it was taking ownership and this is what happened. I believe in my team.”

Spieth was installed as one of the favorites at Augusta this week following his win in Texas. A month ago, his odds were nearly triple what they’ll be at tee time Thursday morning.

A five-time winner in 2015, including The Masters, Spieth said he doesn’t think about rattling off wins in multiples. He is focused solely on how to get another green jacket. His next tournament victory would be the 13th Tour win (16th overall), and Spieth is only 27 years old after turning pro at age 19.

“I’ve really fared well on the greens,” Spieth said. “Whether I’ve come in putting well or even in tough putting years, the ball seems to find the hole here, when I get on the putting surface. I think a lot of that has to do with speed control. I think mid-range and even long-range putting and touch putting is more important here than it is just about anywhere else. I would say that over anything else has been the biggest strength over the years.”

Spieth became the second-youngest golfer to win the Masters in 2015 after a runner-up ending in 2014. He tied for second after sharing the 54-hole lead with Bubba Watson.

In 2015, Spieth arrived for the Masters off of a runner-up finish at the Texas Open and shot an opening-round 64. He chased that with a second-round 66.

“It was nice to kind of I guess feel normal towards the end of the round yesterday,” Spieth said. “It was a grind, but to make birdies closing out was fun on a pretty difficult track. Then here and there it’s hit me a little bit, but all in all, it’s about refocusing here and taking it the next step.

“I feel it’s actually been a lot easier for me, over the last 12 hours, to just look forward versus kind of looking back, I guess. That’s exciting.”