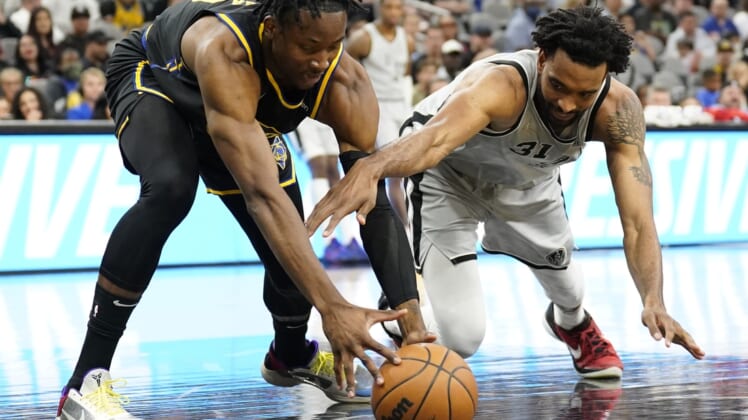 Jordan Poole scored 18 points, including four key late free throws, to help the visiting Golden State Warriors hold on for a 100-94 win over the San Antonio Spurs on Saturday in the penultimate game of the regular season for both teams.

The contest was the first of back-to-backs for both squads, with the Spurs heading to Dallas on Sunday while the Warriors travel to New Orleans to wrap up the regular season. Golden State (52-29) can clinch the third spot in the Western Conference with a win against the Pelicans.

The loss relegated the Spurs to 10th place in the West; San Antonio will play at New Orleans in the play-in tournament on Wednesday.

Golden State led by seven entering the fourth period and never gave up the lead despite a late Spurs push that cut the margin to two points on three occasions. Poole’s two free throws with 47.9 seconds left gave the Warriors a 98-94 advantage and another pair from the charity stripe with 17.1 seconds remaining allowed Golden State to hold on and win its fourth straight game.

Lonnie Walker IV led all scorers with 24 points while Tre Jones had 15, Joshua Primo added 14 and Josh Richardson contributed 10 points for the Spurs (34-47).

The Warriors led by as many as 15 points in the second period after a Wiggins 3-pointer with 1:19 to play in the half. San Antonio finished the period by scoring the final five points and pulled back to within 54-44 at the break.

Kuminga and Walker led their respective teams with 13 points apiece at halftime.

The Warriors were up by 17 points on two different occasions in the third quarter, but San Antonio rallied to pull to within 78-71 via a 10-2 flurry capped by Primo’s buzzer-beating 3-pointer.