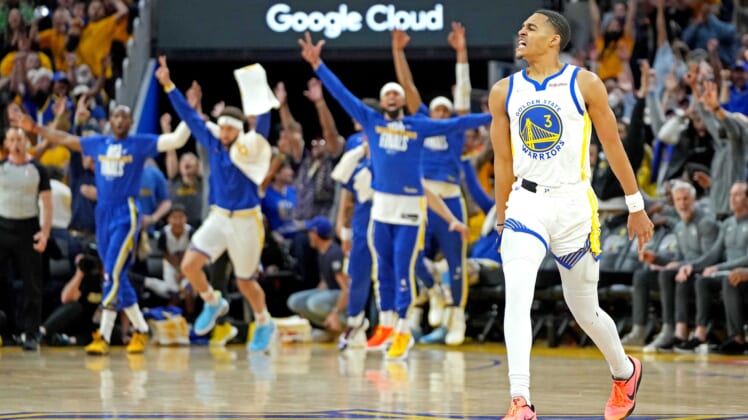 Golden State Warriors guard Jordan Poole did not have it in Game 1 of the NBA Finals, shooting 2-of-7 with four turnovers as the Boston Celtics stole the opener.

Benched for pretty much the entire third quarter in Game 2 on Sunday night, Poole apparently took that personally.

The 22-year-old guard hit two three-pointers in the final two minutes of the third quarter. That included a 39-foot buzzer beater. It was a surreal scene inside San Francisco’s Chase Center.

This concluded a 19-2 Warriors run to end the third quarter, giving the Warriors an 87-64 lead as they look to avoid a 2-0 series deficit.

For the most part, Jordan Poole has been stellar throughout the 2022 NBA Playoffs. However, he struggled in Game 1 and through the first half of Game 2.

If the Warriors can get this version of Poole moving forward in the NBA Finals, they could very well take the NBA title. It’s up to the youngster to show up on a consistent basis.