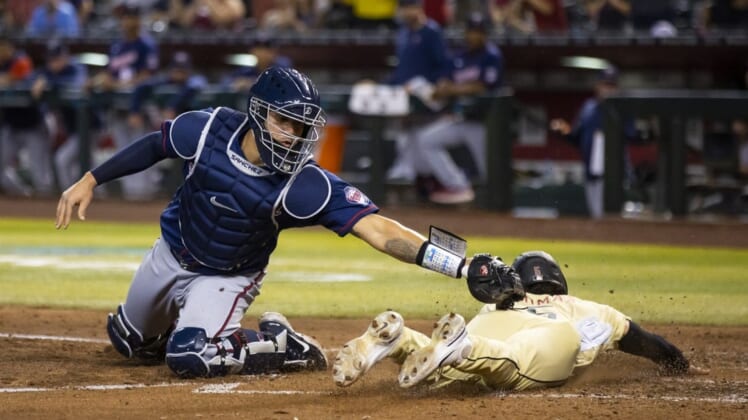 Jordan Luplow homered twice and drove in three runs and Jake Hager had three hits to help the Arizona Diamondbacks record a 7-2 victory over the Minnesota Twins on Friday night at Phoenix.

Madison Bumgarner (3-6) gave up two runs in six innings to win for the first time since May 10 as Arizona prevailed for the fifth time in nine games.

Byron Buxton hit his 19th homer of the season for the Twins, who dropped to 2-2 on a six-game road trip.

The contest was Minnesota’s first in Phoenix since May 22, 2011. The Twins were swept in a three-game set by the Diamondbacks during that visit.

Bumgarner yielded nine hits and one walk while striking out three. The left-hander was 0-5 over his previous six starts.

Sean Poppen, Kyle Nelson and J.B. Wendelken each pitched one scoreless inning of relief for Arizona.

Buxton led off the game with a 447-foot homer to left.

Carson Kelly had a leadoff single for Arizona in the bottom of the first. One out later, Luplow slugged a 433-foot homer to left to put the Diamondbacks ahead.

Minnesota tied the score in the third on Jose Miranda’s run-scoring single to left.

Luplow homered again in the bottom of the third to give Arizona a 3-2 edge. The 387-foot blast was his ninth of the season. It was his second two-homer game of the season.

Buddy Kennedy walked and Alek Thomas singled to start the fourth for Arizona before Hager laid down a bunt single. Smeltzer fielded the ball and threw wildly to first as both Kennedy and Thomas scored to make it 5-2.

Kelly singled home Hager later in the inning to make it a four-run margin.

Daulton Varsho reached on a bunt single with one out in the fifth and Kennedy followed with a single for his first major league hit. After Minnesota third baseman Gio Urshela fumbled Thomas’ bouncer for an error, Hager singled to left to score Varsho and make it 7-2.