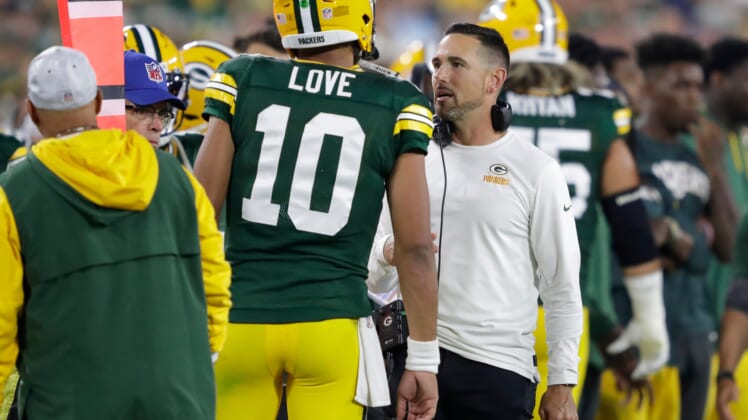 The Green Bay Packers could have a sleeping giant on their hands in the name of Jordan Love. We’ve yet to see much from the 2020 first-round pick, as he’s had just one NFL start under his belt thus far.

It’s not his fault he was drafted to the team who has a Super Bowl-winning, four-time NFL MVP as the starting quarterback. It wasn’t his choice to become the backup to Aaron Rodgers for his first three seasons in the league, but that’s been Love’s story. Stuck on the bench, trying to pick up everything he can from the future Hall of Fame quarterback as he waits for a chance to display his talent.

Love’s under contract through the 2023 season, so for now he appears stuck into his QB2 role.

But one thing that isn’t stuck is Love’s steady development, which his head coach Matt LaFleur has been impressed with during the early portion of the 2022 season.

After Love’s latest Week 2 preseason performance on Friday night, LaFleur answered a few questions about his 23-year-old QB, and in doing so, he said the former Utah State product is “light years ahead” of last season.

Love himself spoke about being much more comfortable as he gains more experience in the NFL. It likely hasn’t helped that he’s constantly working with different receivers, but Love is showing he has enough talent to overcome whatever obstacles are in his way. Maybe not on an Aaron Rodgers level, but Love has flashed some skill.

It’s still difficult to say whether Love has enough talent to be an NFL starting quarterback. He’s certainly shown the capability to be a high-level backup, and in the short-term, that’s all the Packers need. But there will be a time, maybe not until after his contract expires after 2023 when teams will wonder if Love has what it takes to become a locker room leader.

For now, all Love can do is continue to put together an impressive film reel, showcasing his skill set. Teams always value quarterbacks with mobility who can make off-schedule throws on the run. Love certainly fits that profile, but we don’t know how consistent or how refined his repertoire is just yet.

Yet, his head coach is a big believer and is buying stock in Love’s future. Maybe it’s time we all do the same.