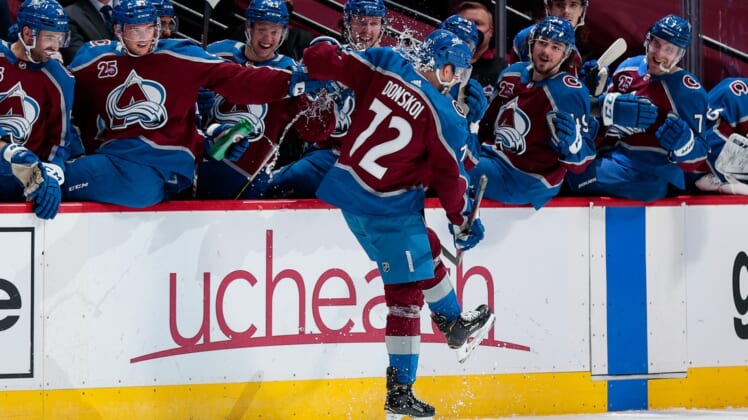 Joonas Donskoi had a hat trick in the first period and later added an assist, Gabriel Landeskog had two goals and an assist, and the Colorado Avalanche beat the Arizona Coyotes 9-3 in Denver on Wednesday night.

Michael Bunting had a goal and an assist, Oliver Ekman-Larsson and Conor Garland also scored and Ivan Prosvetov had 23 saves in his NHL debut for the Coyotes. Prosvetov came in for Adin Hill, who allowed four goals on 10 shots before being pulled 6:04 into the game.

The teams combined for six goals in a span of 3:27 in a wild first period.

Donskoi started things when he knocked in a rebound 4:04 into the game, and 27 seconds later Burakovsky scored on a one-timer.

Arizona got one back off the ensuing faceoff when Bunting got behind the Colorado defense and beat Grubauer high for his first goal at 4:41.

Less than a minute later, Bellemare made it 3-1 with his fifth of the season, a slapshot off of a drop pass from J.T. Compher at 5:36. Donskoi got his second of the night 28 seconds later when he stuffed a shot between Hill and the post.

That ended Hill’s night, but 1:27 after Prosvetov replaced him, Donskoi scored a power-play goal to complete the second hat trick of his career.

Ekman-Larsson got Arizona within 5-2 with a power-play goal at 18:57 of the first. It was his second of the season.

Garland’s 10th goal of the season made it 5-3 at 17:45 of the second. Landeskog responded with his first goal of the night 21 seconds later.

Rantanen scored a power-play goal at 6:05 of the third, his 21st of the season, and Landeskog’s second of the night and 14th on the year at 11:57 put the Avalanche up by five goals.

Burakovsky finished the scoring with his ninth of the season at 16:49.