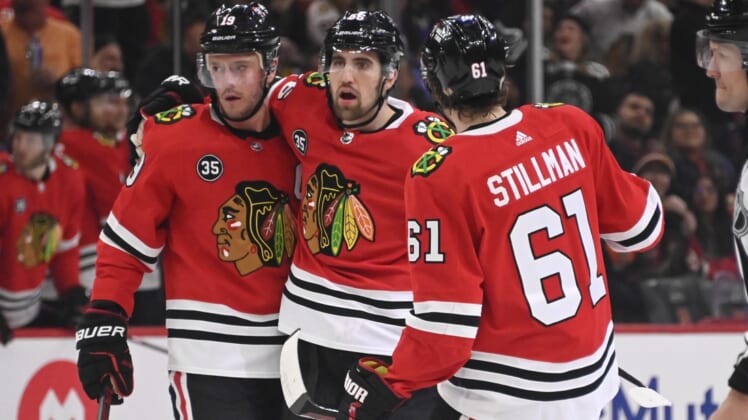 Jonathan Toews had a goal and an assist, Erik Gustafsson and Alex DeBrincat scored and Kevin Lankinen stopped 33 shots as the Chicago Blackhawks opened their final homestand of the season with a 3-1 victory over the Philadelphia Flyers on Monday night.

Chicago snapped a six-game skid in the series while winning for just the fifth time in the past 18 meetings with the Flyers.

Gustafsson opened the scoring 1:44 into the game, beating Philadelphia goaltender Felix Sandstrom with a long wrist shot. Dominik Kubalik, whose screen of Sandstrom was crucial to the goal, also recorded the secondary assist.

Toews tallied his second point of the night 4:31 later. Seconds removed from serving a minor penalty for slashing Kevin Hayes, Toews exited the box and took a pass from Sam Lafferty and converted a breakaway for a 2-0 Chicago lead.

Philadelphia cut the deficit to one less than two minutes later. A precision pass from Travis Konecny freed Scott Laughton and Hayes for a 2-on-1, with Hayes putting the puck past a sliding Lankinen for the goal.

Chicago’s Alex DeBrincat scored on a one-timer at 7:45 of the third to account for the final margin. Patrick Kane notched an assist, the 750th of his career, on the play, while DeBrincat matched a career best with his 41st goal of the season and set a new high with his 77th point.

Sandstrom made 30 saves for the Flyers, who were 0-for-4 on the power play. Chicago, which was outshot 34-33, was 0-for-5 on the man-advantage. The Flyers went to the power play with 1:23 to go and quickly hit the post but were unable to convert.

The Blackhawks won for just the second time in their past 10 games at United Center.