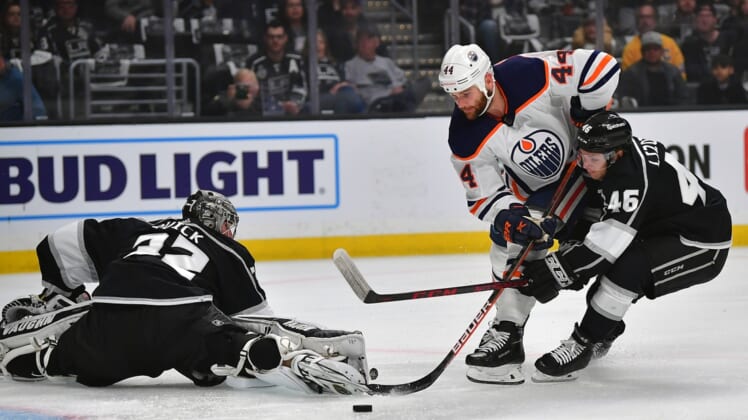 Jonathan Quick collected his 10th career playoff shutout and the host Los Angeles Kings rode a pair of first-period goals by Trevor Moore and Troy Stecher to a 4-0 victory over the Edmonton Oiler on Sunday in Game 4 of their Western Conference opening-round series.

Carl Grundstrom added a pair of late goals and an assist for the Kings, who evened the best-of-seven series at 2-2.

Game 5 will be Tuesday in Edmonton.

Quick, who was pulled before the midway point of the Kings’ Game 3 blowout loss, made 31 saves Sunday. Arguably his biggest came during a series late in the second period while he was without his trapper.

Goalie Mike Smith stopped 42 shots for the Oilers, who scored a combined 14 goals in a pair of victories in the second and third games of the series.

Coming off those one-sided defeats, the Kings stormed out of the gates, racking up 20 shots on goal in the first period alone.

Their reward came when Moore’s second goal of the playoffs opened the scoring at the 8:03 mark. The puck popped out of a scrum along the side boards right to Phillip Danault, who zipped to the front of the net, but opted to leave a drop pass at the doorstep for Moore to tap in.

Stecher doubled the lead six minutes later. During four-on-four action, the puck was worked to Stecher at the right point and he sent a slap shot that ricocheted off the stick of Oilers defenseman Duncan Keith and into the net.

Grundstrom extended the lead with five minutes remaining in regulation. As he was brought down from behind while crashing the net, he shoved the puck over the line, along with Smith’s leg.

Grundstrom added an empty-net goal with 91 seconds on the clock.

Edmonton was without forward Derek Ryan, who was in an intentional collision with Andreas Athanasiou in Game 3. Derick Brassard took his place in the lineup.