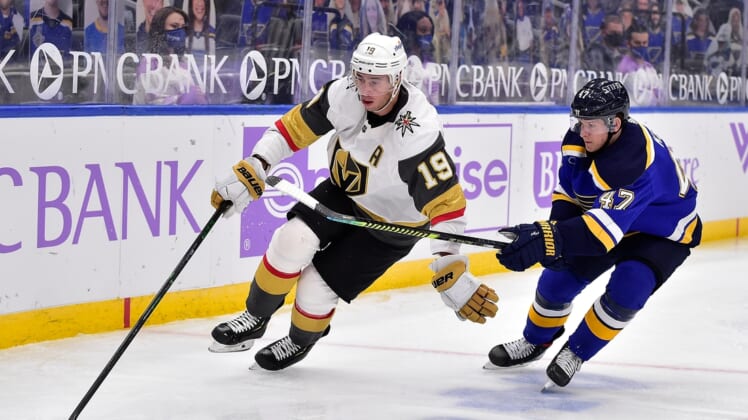 Jonathan Marchessault scored with 17.7 seconds remaining in overtime to give the Vegas Golden Knights a come-from-behind, 4-3 victory over the St. Louis Blues on Friday night in Las Vegas.

Despite the loss, the Blues (24-19-9, 57 points) clinched the final playoff spot in the West Division. Fourth-place St. Louis got a point for losing in overtime while the Los Angeles Kings lost 3-2 in regulation to the Colorado Avalanche, sending the Blues to the postseason.

Marchessault came in alone on the right wing, took a pass from Alex Tuch and then fired a shot over the glove of goalie Jordan Binnington for his 17th goal of the season.

Reilly Smith, Alec Martinez and Nicolas Roy also scored goals and Nicolas Hague had two assists for Vegas (38-13-2, 78 points), which maintained a four-point West Division lead over the Avalanche with their sixth straight home win. Robin Lehner finished with 22 saves and also picked up an assist on the winning goal.

Vegas took a 1-0 lead at the 13:23 mark of the first period. Smith jammed in Hague’s crossing pass into the right corner of the net for his 11th goal of the season.

St. Louis tied it near the end of the first period on a short-handed goal by O’Reilly. Bozak outraced Shea Theodore for a puck behind the net and then found O’Reilly alone in the middle of the left circle. O’Reilly fired a wrist shot past Lehner’s stick side for his 24th goal of the season. It was just the second short-handed goal allowed this season by the Golden Knights.

Vegas cut it to 3-2 with 10 seconds left in the second period when Martinez one-timed a Mark Stone pass from the left point for his ninth goal of the season.

Roy tied it at 6:52 of the third period with a spinning shot from the slot past Binnington’s glove side for his sixth goal of the season.