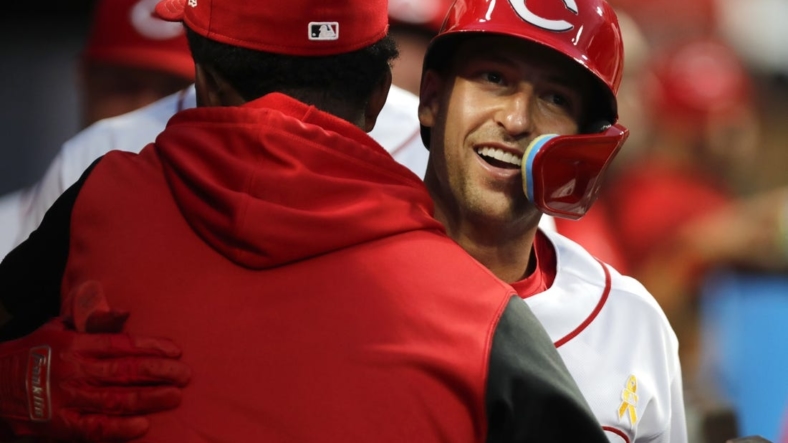 Jonathan India recorded the first walk-off hit of his career and Spencer Steer homered and scored the winning run in his major league debut as the Cincinnati Reds edged the visiting Colorado Rockies 3-2 Friday night.

India’s third hit of the night was a high chopper over the pitcher’s mound with one out in the bottom of the ninth off reliever Alex Colome (2-7), after Steer led off the inning with a double. Center fielder Garrett Hampson was brought in as a fifth infielder and had no play at the plate as the winning run scored.

Alexis Diaz (5-2) pitched around a one-out single to earn the win, Cincinnati’s fourth in 11 games.

The Rockies fell to a major league-worst 20-45 on the road this season and 2-6 on their current, season-long 10-game road trip.

India extended his career-long hitting streak to 15 games with a leadoff single in the first inning against Colorado starter Kyle Freeland. For India, it also extended his on-base streak to 18 games. Both streaks are currently the best in the majors.

After Nick Senzel reached on a fielder’s choice, Kyle Farmer’s single put runners at first and second. Senzel advanced to third on Donovan Solano’s flyout to right. Senzel was thrown out trying to steal home when Farmer broke for second base.

The Reds had another chance in the second with runners on first and second, but Chuckie Robinson grounded out to second to end the inning.

Sean Bouchard turned on a high fastball from Cincinnati starter Luis Cessa and drove it into the left field seats for his first major league homer, giving the Rockies a 2-0 lead in the third inning.

After working out of jams in the first and second innings, Freeland settled down over the next two innings before running into trouble in the fifth.

Steer, a third baseman Cincinnati acquired in the Tyler Mahle trade to Minnesota, made his major league debut, walking in his first at-bat in the second before homering to center off Freeland in the fifth to draw the Reds within one, 2-1.

Steer walked to load the bases in the sixth when Justin Lawrence relieved Freeland. Lawrence recovered to strike out Jose Barrero to end the inning.

Jake Fraley belted his eighth homer of the season off Dinelson Lamet to tie the game in the seventh.