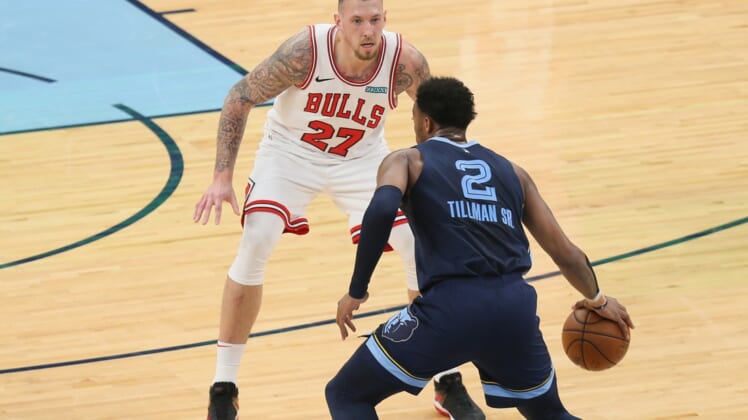 Jonas Valanciunas recorded his franchise-record, 15th consecutive double-double with 26 points and 14 rebounds to lead the Memphis Grizzlies past the visiting Chicago Bulls 101-90 on Monday.

A big fourth quarter in which the Grizzlies outscored the Bulls 31-16 powered the hosts after three periods of closely contested but error-plagued basketball.

The teams committed a combined 37 turnovers, and Memphis had coughed up possession more times midway through the first quarter than it made field goals. The Grizzlies finished with 20 turnovers.

The final period took on a different tone. Behind Valanciunas, who scored 10 of his game-high total in the quarter, the Grizzlies seized control.

Chicago’s Thaddeus Young (20 points) sank a 10-footer for an 85-85 tie with 4:50 remaining, but Memphis’ Grayson Allen responded with one of his four made 3-pointers. That began a decisive, 16-4 run punctuated when Valanciunas dunked home his final two points.

Valanciunas’ key performance came just one night after he matched his career high of 34 points and grabbed 22 rebounds in a loss to the Indiana Pacers. His record-setting streak of double-doubles surpassed a mark set by Zach Randolph in January 2011.

Valanciunas also contributed to a solid defensive effort, blocking three shots. Teammate Kyle Anderson made four steals, and the Grizzlies held the Bulls to 5-of-31 shooting (16.1 percent) from beyond the 3-point arc.

Monday marked the first time since March 17 that Memphis held an opponent to fewer than 100 points, while the Bulls fell to 0-8 on the season when they fail to reach triple digits.